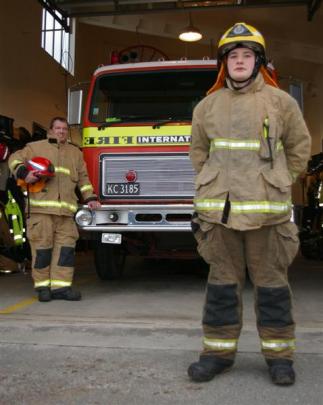 Ashley Diamond ready for action at the Tapanui Volunteer Fire Brigade's station. With him is his father Mark.

A tractor fire in West Otago this month marked the beginning of a new era in a fire-fighting family dynasty.

When Ashley Diamond donned his breathing apparatus and grabbed the hose reel from the fire engine on November 14, he became the fourth in his family to fight fires for the Tapanui Volunteer Fire Brigade.

Mr Diamond (18) was following in the footsteps of father Mark Diamond, grandfather Douglas Kelly and great-grandfather Snowy Ruthven, who have served West Otago.

Mr Kelly died in 1991 before his grandson was born, but Mr Diamond said he had heard stories of his time in service.

His great-grandfather received a gold star for 25 years service.

Ashley Diamond has served two years already, attending callouts since he was 16, but always remained in the background, ''under the wing'' of the chief fire officer.

He passed his seven-day recruit training in Dunedin last month and can now take an active role.

On a Friday earlier this month, about 5.30pm, Ashley Diamond's pager went off and he ran to the fire station, three blocks away, in his socks.

The tanker left with two crew on board, Mr Diamond being left behind.

Then the call came for the second engine.

He said he was ''pretty chill'' as the truck left the station for the 10 minute drive to the fire.

''It was big black smoke,'' he said. He helped to contain the fire to the tractor. It melted nearby rubbish bins, but did not spread to a nearby shed.

He has yet to fight a fire with his father, who is recovering from surgery this month after fighting bowel cancer and would be out of action for several months, he said.

But he would soon be back to take part in what was a competitive family pursuit.

''They fight each other to get out the door as the siren goes, to run to the station,'' Ashley's mother, Angela Diamond, said.

''When we were up in Dunedin and Mark was having his chemo and radiation there must have been a callout, Ashley texted and said, 'Come on old man you've got to get better soon, I need someone to race to the station'.''

The ''old man'' is Tapanui's station officer and despite his fight with cancer, he continues to conduct the training.

He said he ''wasn't that keen'' initially for his son to join the team, but said he listened to the officers.

The older Diamond, now 49, did not join the fire brigade until he was 39.

His son had a 23-year head start, and his goal was to reach 50 years of service, a feat that would earn him a ''double gold star''.

The New Zealand Fire Service has about 1700 professional firefighters and 8000 volunteers.

Volunteer recruits spend between three and six months working through the reading and book work and take a two-day first aid training course. They then attend the practical training course for a week.

Ashley Diamond said it was not easy.

He was the youngest by 10 years in the training.

''Dunedin just about killed me, far out,'' he said.

''I don't think I've sweated that much in a week.