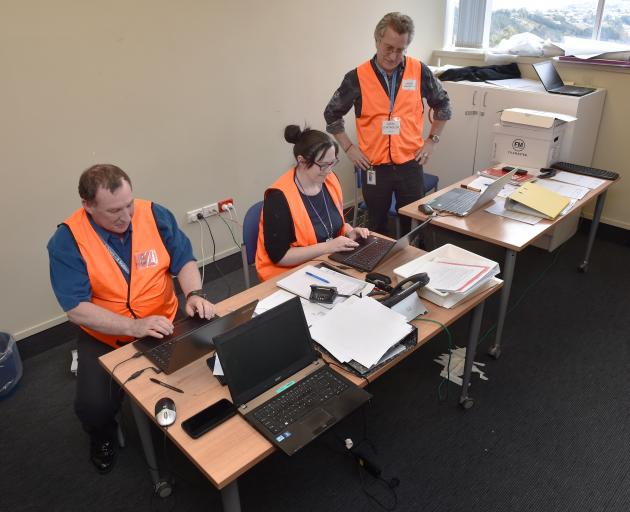 Monitoring developments at the Southern District Health Board’s measles emergency operations centre at Wakari Hospital are (from left) centre manager Owen Black, administrator Toni Patterson and local controller Tom Scott. Photo: Gregor Richardson
Queenstown and the Lakes district have received additional doses of the measles vaccine, as health authorities battle to contain an outbreak of the disease in the town.

There have been 20 confirmed measles cases in Queenstown so far, but as people with the highly infectious disease can be contagious for several days there are concerns there could be more, undetected cases.

GP clinics and a free drop-in vaccination clinic at St John, Frankton, had been busy administering the MMR vaccine to anyone unvaccinated, or those older than 4 years old who had only had one measles vaccination.

Demand is high for vaccinations throughout the region, an SDHB spokesman said.

"Several clinics in the region have either run short or run out completely of MMR vaccine.

"The availability of measles vaccine is still limited for most of the district at this time, although the Queenstown Lakes district has received additional vaccine.''

The Ministry of Health has asked general practices and primary health organisations to target measles vaccinations to priority groups.

The Ministry is aiming for all children to receive their vaccines on time at 15 months, and 4 years to maintain the national childhood immunisation schedule.

Meanwhile, the SDHB said contingency plans were in place in case the Queenstown measles outbreak spreads to other centres.

"We have a back-up plan if it does get into Invercargill or Dunedin.

"We will use the same containment strategy we are already using in Queenstown, which is all about getting as many people up to date with their vaccinations as possible.''

While the disease had not spread to the southern cities, the SDHB's advice was that residents should confirm their vaccination status.

In Queenstown, ski field workers had been given priority for vaccination, as several cases had reported by staff working at the Remarkables ski field.

Tourists and school groups were also being given precedence but the general Queenstown population was now able to be vaccinated too, and 158 people had visited the St John drop-in clinic by yesterday afternoon.

Of the 20 Queenstown cases, 19 were locals and one was an Auckland visitor.

"Two doses will protect 99% of people who have the vaccine.''

National immunisation statistics are complete from 2005, when a national register was created.

Anyone born before 1969 is considered immune, as they will have already been exposed to the virus.