New 'toy' for the boys at Macraes 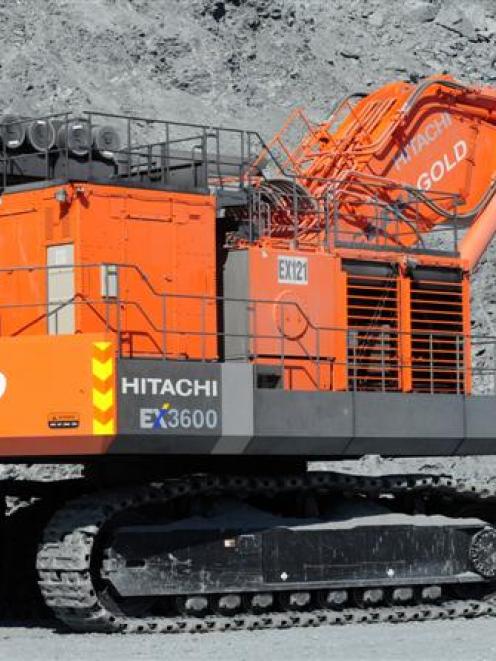 Macraes operation general manager Bernie O'Leary (left) and Hitachi director Kiichi Uchibayashi, of Japan, admire the new 359-tonne mining excavator which has started work at the Macraes gold mine. Photo by Craig Baxter.
"I came from a large family. I never had toys like this when I was a child," digger operator Paul Barringer beamed yesterday, as he admired his new "toy" - a whopping 359-tonne mining excavator.

The Hitachi EX3600-6 excavator, worth about $9 million, was officially handed over to OceanaGold at the company's Macraes gold mine yesterday.

The excavator arrived on a ship from Japan, in 41 packages, into Lyttelton Port in late August.

The ship sailed via Brisbane, where the 22cu m bucket was made.

The disassembled digger was then transported south to the Macraes mine where it was assembled by CablePrice technical and mining specialist staff, before testing and training.

The largest excavator in New Zealand - although Hitachi makes two larger models - it will mine about 80,000 tonnes of material a day, loading a 190-tonne truck in two and a-half minutes.

Mr Barringer, who has been operating diggers for "20-odd years", described it as "beautiful" and smooth to operate.

"Not many people get to drive machines like this. Not in this country," he said.

A fold-away ladder helped with access to the air-conditioned cabin where Mr Barringer worked 12 hours a day.

"You're sitting up pretty high. You can't see the tracks. You've got to be thinking all the time where you are and what you're doing."

While some people found the idea of working in such a lofty perch claustrophobic, it was something you got used to.

He travelled to work each day from Mosgiel and loved his job, he said.

A smaller, 250-tonne excavator has been ordered for the mine and is due in June next year.