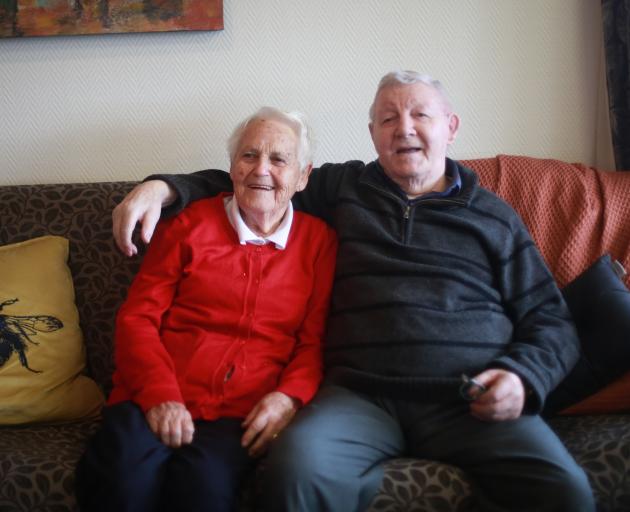 Aura and George James of Oamaru celebrate their 70th wedding anniversary at Iona Home. PHOTO: REBECCA RYAN
Aura Twining first caught George James' eye in 1948 when she started biking past Stevenson and Cook Engineering Company in Port Chalmers, where he worked as a boiler-maker.

"She used to bike up every morning ... and walk from there down to the shirt factory in Port Chalmers where she worked," Mr James said.

"I happened to say to Gilbert Lewis ... `who's that sheila who leaves her bike out there in our bike rack?' and he said `that's Aura - that's my sister-in-law' and he said `I'll introduce you'."

A couple of weeks later, they formally met at a dance at Port Chalmers. Mr James (92) said it was love at first sight for him, and Mrs James (90) said she "liked his dancing".

The couple, who celebrated their 70th wedding anniversary on Thursday, married the following year in the Iona Presbyterian Church at Port Chalmers, on April 11, 1949. Mrs James said she had the "best of everything" on the day, but their honeymoon had to be postponed because she caught the measles.

The couple settled in Port Chalmers and later lived at Ravensbourne, Sawyers Bay and Wakari before moving to Oamaru in 1988, to be near family.

Mr James said he was "damn lucky" to be celebrating their 70th anniversary after a near-death experience, aged 35.

"I fell down the dry dock at Port Chalmers and I didn't think I was going to make it," he said.

"My shoulder was all fractured and from my hip down was black and blue."

Mr James spent three weeks in hospital, was in an upper-body cast and could not work for six months. Mrs James had to care for him and their seven children, including youngest daughter Vanessa who was just 6 weeks old at the time.

"I had a very good mother-in-law [to help]," Mrs James said.

They said there was no real secret to a long and happy marriage, but attributed their longevity to "a bit of give and take" and shared interests.

"I said to Aura when we first got married `you look after the house, and I'll put the tucker on the table' and we've both done what we said we were going to do," Mr James said.

The couple have led busy, active lives - they both enjoy playing bowls, Mr James was a keen rugby player and coach for Port Chalmers Rugby Club and Mrs James loved fishing in her younger days.

Her family had fishing boats at Shag Point, where she grew up, and owned the Shag Point coal mine.

Mr James is a life member of the Port Chalmers Rugby Club (now amalgamated with Harbour Rugby Club), the Awamoa Bowling Club and the New Zealand Federation of Boat Builders and Bridge Builders. He also served as a councillor on the Port Chalmers Borough Council from 1968 to 1971.