By Daniel Birchfield
0 Comments
Nothing was going to stop Oamaru's Riccardo Palmer taking part in Saturday's Rainbow Run at Oamaru Racecourse - not even a broken arm.

The 11-year-old was one of about 480 people who made their way around the racecourse for a distance of 5km, being pelted with coloured powder of various shades at stations along the way.

Riccardo, who completed the run with his Columba Scout Group troop, broke his arm on the last Saturday of the recent school holidays, when he slammed his fist into the ground. 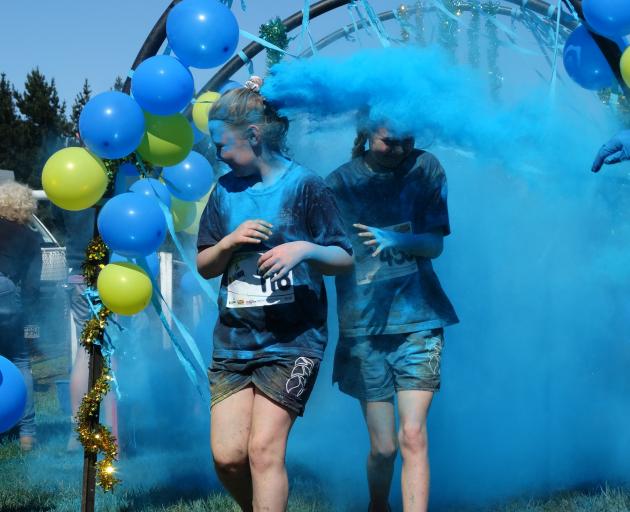 Samyah Rogers (left, 10) and Zoey Hughes (10), both of Oamaru, do their best to avoid being hit with blue powder at the Rainbow Run at Oamaru Racecourse on Saturday. PHOTO: DANIEL BIRCHFIELD
At the time he did not know the group would be involved, but despite his injury was determined to see it through.

"I was probably going to do it anyway.

"I did the 5km non-stop, but it was probably harder than if I didn't break it. But it was pretty good. I loved it."

Sport Waitaki co-ordinator Mitch McRae said it was the seventh time the event, which offered participants a different dynamic to a traditional run, had been held.

"I think with the paint being thrown ... getting exercise in, walk or run, adding that element of throwing paint makes it a little more attractive for people and enjoyable for everyone."

Money raised at the run goes to the organisation Sporting Chance, which supplies children with footwear or pays their club subscription fees so they can play a sport.