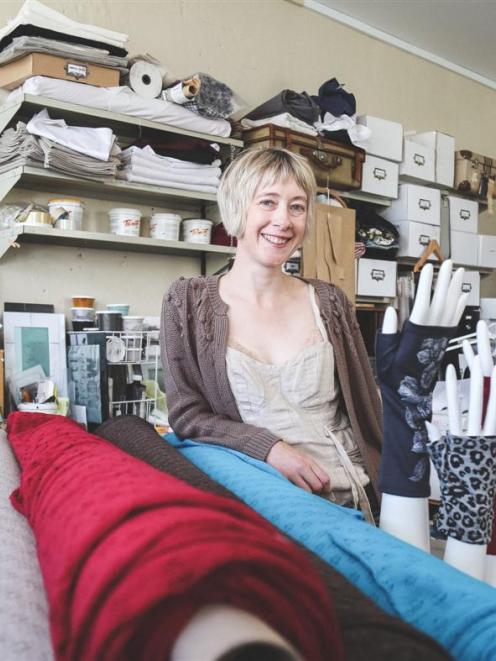 Now working from a boutique studio in Oamaru's Victorian Precinct, Ms Watts is preparing to launch her 2015 winter range of fine woollen fingerless gloves, lovingly hand-crafted and screen-printed using some of the country's finest merino wool.

The talented, unassuming 36-year-old's journey into fashion design has been ''full-on'' as her business got very big, very quickly.

Her gloves are now stocked in more than 100 outlets around the country, as well as two in Australia and five between the US and Northern Ireland.

Ms Watts has always had a passion for art, drawing and all things vintage.

That passion led her to Christchurch Polytechnic Institute of Technology, where she studied craft design. 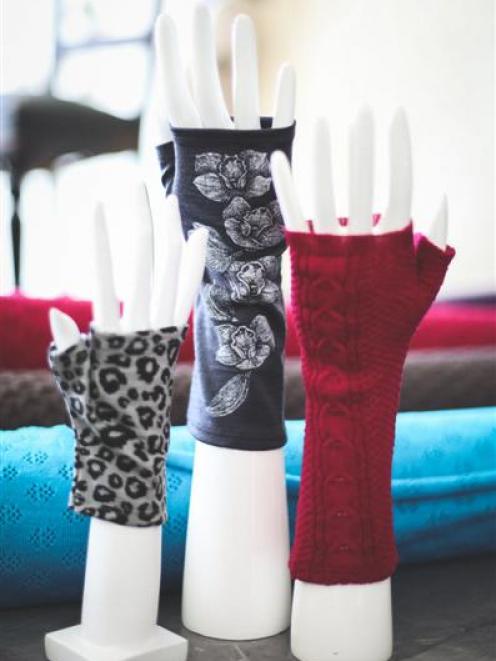 Examples from her 2015 merino fingerless glove range.
After graduating, she decided she ''needed to learn a trade'', so she started her own clothing label and taught herself to sew.

She worked in a studio, in an old sewing factory, on the corner of Tuam and Madras Sts in Christchurch where rent was just $25 a week, but it got bitterly cold when the wind came up through the floorboards.

She started making the fingerless gloves for Dunedin clothing shop Gloria and ''they just took off'', she said.

Gloria closed in early 2008, but Ms Watts was urged to keep going and develop her fingerless gloves range.

Working 30 hours a week in wardrobe for two different theatre companies, she piloted a fingerless glove range in two stores later that year and started wholesaling in 2009.

Although she is solidly established now, she has had her fair share of difficulties - even last year, she said she ''quit'' twice.

Her greatest strength, her insistence on supreme quality, service and craftsmanship, can sometimes also be her greatest weakness, but the hard work, late nights, early mornings and big risks have paid off.

Now, for the first time in seven years, she is taking the time to focus on ways she can improve her business.

''I've kind of been in the same job for seven years and [before that] the longest I'd ever held a job for was a year, so I need some change. I want to do something more creative,'' she said.

She is developing three new websites, one wholesale and two retail, and this year, two-thirds of her screen-printing work is being transferred to Christchurch.

Last year, she was doing most of the glove-making process, from designing to dispatching, herself.

''I was doing all of the screen-printing and that's a two and a-half to three-days-a-week job ... and unfortunately design is something that gets packed into a few weeks a year and that's the sad thing about it,'' she said.

''I'm hoping that will mean that in 2016, I'll be able to bring someone in to do a dispatch role, which will free me up to be a designer, because my best work is things I spend a month on, not a day or two on.''

She has also gone back to her roots and established a New Zealand giftware range of scarves and tea towels, under the name of ''Crown and Feathers''.

''I'd love to bring in more products, I've got designs for new products, it's just a matter of having more time to actually get those designs off the paper and into production,'' she said.

The key looks of her 2015 Kate Watts fingerless gloves range are florals, textured merinos and the return of some old classic prints.

''Florals are always really popular sellers so I try to do something different each year,'' she said.

This year, it's an orchid design.

She introduced textured merinos in 2014, with four designs in her range. This year, she has expanded to eight.

''Lots of new colours, lots of new textures and they're just a really gorgeous fabric knitted in Auckland just for me,'' she said.

It was always hard to put together a range with a balance of merino colours, screen-printing, design and textures.

''Thinking 'Who are my customers?' and 'What is the person who's going to like pink going to like in a print?' ... putting together the best collection so there's something for everyone,'' she said.

She has built up a back catalogue of designs and about 90 different styles, some dating back to 2012, are still available.

Ms Watts has lived in Oamaru for almost three years.

''There's a bit of a shortage of a manufacturing community here, so I struggle in that sense, but ... it's just a really cool place to live and hang out,'' she said.

Couriers deliver to her doorstep of her studio and apartment in the old Tiger Lily's building in Tees St.

''I could not be living in a building this cool, or a studio this large for this money [in Christchurch]. That's a hugely positive thing,'' she said.

The 2015 Kate Watts merino gloves range will be launched nationally next month and will be available around the country in early March.