By Ruby Heyward
0 Comments
It was a case of mettle to pedal.

The event started with an under-11 children’s route, which Mountain Biking North Otago president Marcus Brown said was an important part of the annual series.

"It’s really about getting these guys going and getting a bit of confidence," Mr Brown said.

"It’s about the future.

"Giving these guys some encouragement, that’s what the club is about.

"They are the next generation of mountain bikers."

For some it was a family affair. 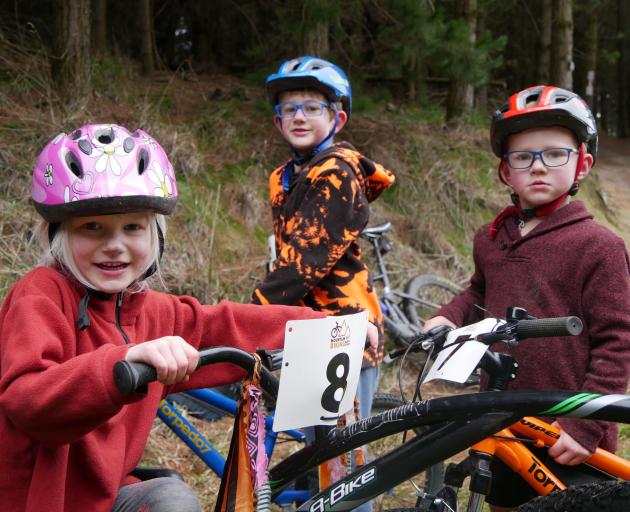 Raring to hit the Reservoir Forest Mountain Bike Track in Oamaru yesterday are siblings (from left) Katie (4), William (8) and Benji (6) Haig. PHOTO: RUBY HEYWARD
Participant Aidan Haig took his three children William, Benji and Katie along for the children’s race — riding with Katie on a trailer bike — and then competed in the adult open.

After the children’s 30-minute race, 32 adults hopped on their bikes for a 50-minute race.

The aim was to complete the most laps within the time limit, but yesterday’s race

was just part 1 of the series.

The next race would be held at the Papakaio mountain biking track in two weeks and then there would be another at the Herbert Forest tracks to determine the overall winner, Mr Brown said.

While there were some "star" racers in the mix, the event was more about "giving it a go".

Racers did not have to be experts, although there were some racers who took it very seriously, Mr Brown said.

One year, four dedicated racers were the only ones competing in the series as it was pouring with rain, he said.