The Fort ‘labour of love’ for the Rogers 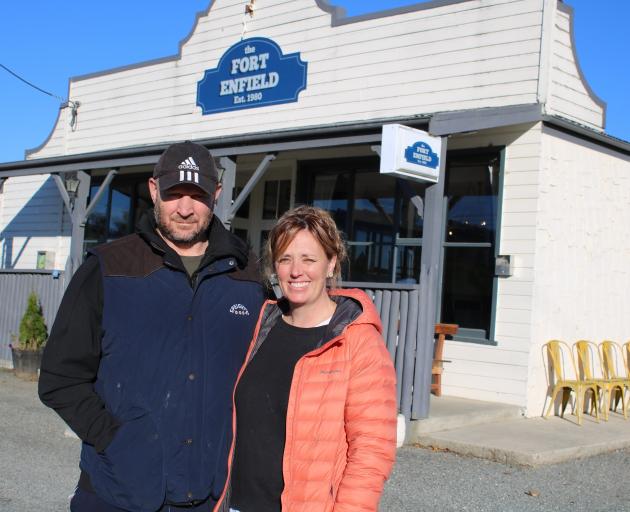 The Fort owners Johnny and Amber Rogers have created a community hub since taking over the Enfield business three years ago. PHOTO: KAYLA HODGE
The Fort Enfield is so much more than just a tavern – it’s the heart of the community, writes Kayla Hodge.

The Fort Enfield has always been somewhat of an institution, and since Johnny and Amber Rogers took over three years ago, it has gone from strength to strength.

After spending 20 years as a chef in the New Zealand Army, Mr Rogers and Mrs Rogers, who had an extensive background in hospitality, were looking for a new venture, and took up The Fort lease on April 13, 2018.

It turned out to be a good move and the couple was welcomed by the community with open arms.

“It’s been a labour of love. At the start, we were sort of flying the aeroplane while were building it and learning,” Mr Rogers said.

“We just sort of saw it as an opportunity to make it a community hub.”

Soon enough, their plane took off, and people were coming from near and far to try their menu – the ribeye, blue cod and seafood chowder were particularly popular.

They extended the premises with a garden bar, built a playground, added more car parks and installed bike racks for the hauls of Alps 2 Ocean Cycle Trail users stopping in – the trail runs right past the front door of the tavern.

Alps 2 Ocean played a huge part in the growth of their business, as the tavern was the only watering hole between Duntroon and Oamaru. Many Oamaru and Weston residents also cycled the section to make a trip to Enfield for coffee, lunch or dinner.

When lockdown hit last year, Mr and Mrs Rogers took the opportunity to renovate the bar area, and made minor kitchen changes with the help of Specialised Services. When the levels allowed for it to reopen, The Fort’s locals pulled through again.

“Everyone really bent over backwards for us during lockdown, and then we were busy straight away. We can’t say enough about the community.”

Mr and Mrs Rogers made sure they gave back to those who helped them, from sponsoring Lions club competitions, local rugby clubs and hosting Pink Ribbon Breakfasts. They had also hosted talent quests, karaoke nights, bands and were looking into starting up quiz nights.

As they moved the business forward, holding on to its history was important. They held a Western night in December, which paid tribute to the opening of The Fort 40 years ago, and they hoped to make it an annual event.

“I think everyone likes the story of the place. It’s got a lot of history, and we sort of get people that have had relations or grown up in the area that come back,” he said.

Mrs Rogers said the ownership the community had of the tavern was not something they expected when they took it over, but it was what they loved the most about the tavern and the community.

“Someone said to us, ‘It’s not your pub, it’s the community’s pub’ … we’ve definitely learnt that’s how it is,” Mrs Rogers said.

Transforming The Fort into a community hub was always their goal. Their 10 staff members had played a big part in that journey, and were an extension of the couple’s family.

“That’s what we often get commented on is our staff and how friendly it is.”