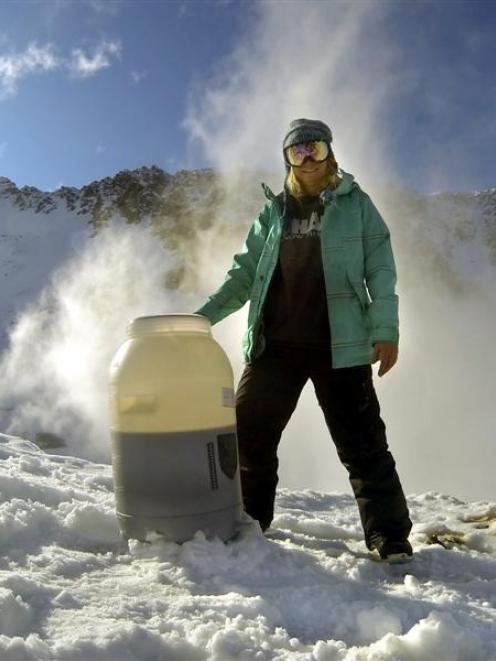 In a collaboration with Craftwork Brewery and the New Zealand Pink Boots Society, Miss Wolfgang has produced a frozen black India pale ale (IPA) to be featured at the Beervana Festival in Wellington this weekend.

After the black IPA had been brewed and fermented at Craftwork Brewery in Oamaru, Miss Wolfgang decided to ''have a bit more fun'' with it.

Instead of freezing the beer in a traditional way, she loaded the two fermenting tubs in the car with her snowboarding gear and drove to Ohau skifield, where she froze the beer in the snow.

''We left the beer in the snow and went snowboarding for the day,'' Miss Wolfgang said.

Because water freezes before alcohol, the chilled brew is drained off the ice that forms in the tank.

With the water drained off, the alcohol concentration in the beer increases, in this case from about 6% to 9.5%.

She had already been working on the black IPA for Craftwork Brewery, to be presented at Riverstone Kitchen's Beer Dinner next month, Miss Wolfgang said.

While she was putting the recipe together, she ''had the brilliant idea'' to freeze it, call it Black Ice and submit it as the collaborative brew for Beervana.

Miss Wolfgang heads to Wellington for Beervana tomorrow and will be pouring the Black Ice on Saturday, for the daytime session at the New Zealand Pink Boots Society stand.

Miss Wolfgang, a brewer who moved from Australia to Oamaru to live with her brewer partner Simon Ross in 2013, is brewing out of Craftwork Brewery in Oamaru and getting ready to launch her own beer brand, with a number of local collaborations already planned.

''I am super excited about starting my own beer brand - brewing small batches of whacky beers at Craftwork, putting together a small business plan and having a whole bunch of fun along the way,'' she said.