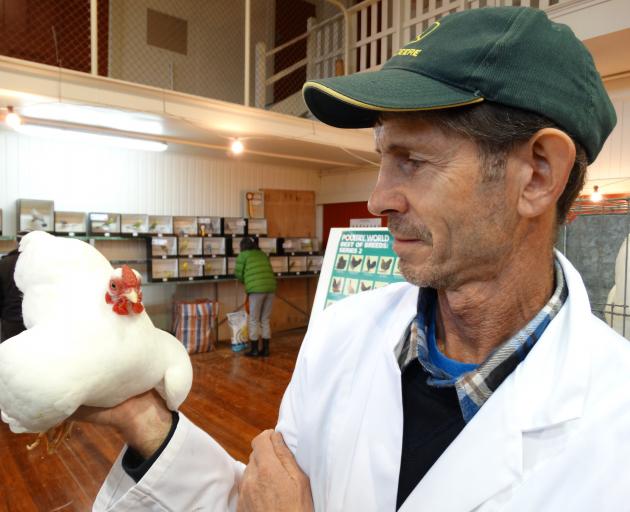 Judge Neill Harrison, of Milton, assesses a white wyandotte bantam at the 135th Oamaru Poultry, Pigeon and Canary Society show in Oamaru yesterday. PHOTOS: DANIEL BIRCHFIELD
What is good for the goose is good for the gander and, in this case, other flocks too.

About 800 birds are on show at the 135th Oamaru Poultry, Pigeon and Canary Society show at the Drill Hall, which started yesterday and wraps up this afternoon.

Among them, for the first time in the society's long history, are geese.

He said the birds were introduced because of one major factor.

"It's to do mainly with the fact there's a lot of lifestyle blocks around the district and lifestylers are into all sorts of weird and wonderful things.

"People have bought geese and we have a standard in our set of standards for geese, so they are able to be shown. We thought `why not? let's have a go'. I think it will become quite popular."

It was a successful first outing for one Chinese goose, raised at Goose Hill Stud in the South Canterbury township of Fairlie. 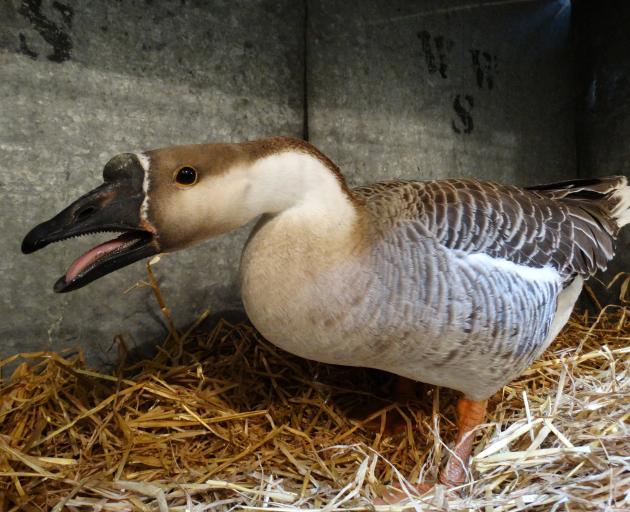 This Chinese goose, raised at Goose Hill Stud in Fairlie, won the top South Island waterfowl prize. PHOTOS: DANIEL BIRCHFIELD
Mr O'Brien said the bird's owners were understandably thrilled and the result was "quite exciting" for them.

He said the geese were joined by other birds commonly seen around the country.

"Every type of domestic fowl that's ever been in New Zealand is represented in this hall ... a lot of these breeds go right back to the early days of the sailing ships and they were bought in to New Zealand by the early settlers. People have loved them ever since."

All birds were judged under the same format, the results of which meant the show was essentially a "beauty contest", he said.

While fowls were plentiful, Mr O'Brien said pigeons were absent "out of caution and respect" due to an exotic disease that had made its way across the Tasman from Australia about three months ago.

The nationwide exclusion would be reviewed before the next show season started.