Having a meaningful career the motivation 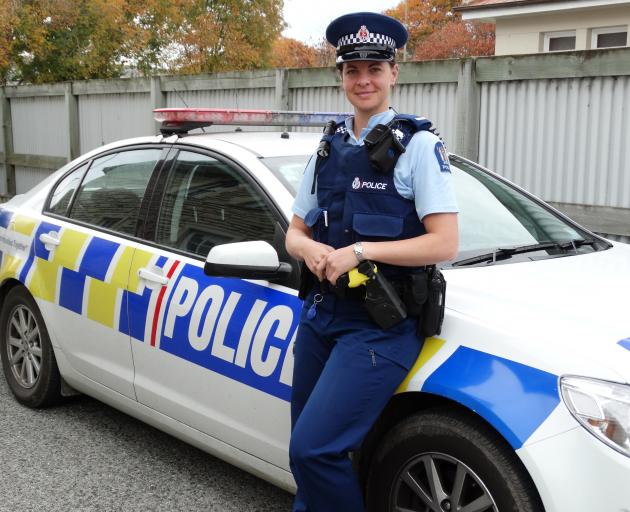 New Oamaru police officer Constable Olivia Winbush, who has been in the town since mid-March. Photo: Daniel Birchfield
When Olivia Winbush decided she wanted to pursue a more meaningful career, joining the police was the obvious option.

The 30-year-old constable has been based at the Oamaru station about six weeks, after a month in Dunedin following her graduation from police college in Porirua in January.

Originally from Nelspruit, South Africa, Constable Winbush arrived in New Zealand with her family as a 12-year-old, settling in Masterton.

"Safety, really, I think was the main motivator," she said of her family’s decision to emigrate.

"My family could sort of see the country was going downhill a bit, so New Zealand was it."

Const Winbush, who was educated at Wairarapa College, said initially her adopted country could not have been any more different from her homeland.

"It was a major culture shock. Everything is different from the landscape to the sense of humour to the language, obviously as well, so it was a big adjustment. But this is home now and I definitely wouldn’t change it."

After leaving school at 16 she broke in horses at a race track in Cambridge, worked with wild Kaimanawa horses and guided horse treks in the Nelson area before travelling overseas.

It was in her late 20s she decided on a career with the police.

"It was maybe two and a-half years ago I wanted to do something that really meant something — a job that was going to give me a feeling that I’d made a change and made a difference."

Const Winbush described her training as "amazing" and at times, "very challenging".

"It was the greatest experience. It was hard work, but it was very rewarding and it’s stuff that you would normally never really get to do."

While she had only been in Oamaru for a short time, she was enjoying her time in North Otago and the work she was doing.

"I really like working with people and talking to people — seeing the change not only in their life but also in their reactions to police. I think a lot of people have a stigma about what police are about and if we can change that, that’s got to be a positive thing.

"I’ve noticed a lot of what we do here is prevention, which is really great. There’s the whole dealing with things after the fact, but it’s preempting what’s happening a lot of the time. A lot of what we do is being visible and approachable to the public as well. I like the fact that it’s not so much the ambulance at the bottom of the cliff like it tends to be in other places."

She encouraged anyone who had thought about it to embark on a career in the police.

"Do it. It’s just great. I couldn’t recommend it more. It’s a sense of achievement and something to be proud of, I think."