On life on the bike lane 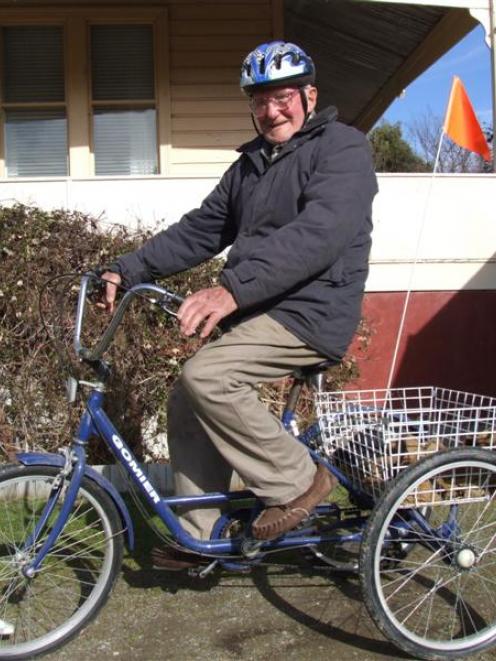 Mac Service (95) sets out for another ride around Palmerston. Photo by Bill Campbell.
Mac Service, of Palmerston, who celebrated his 95th birthday last month, can claim to be the oldest cyclist in Palmerston and probably one of the oldest in Otago.

An adult tricycle allows him to whizz around Palmerston since he gave up driving. Enthusiasm has motivated Mr Service in many of the activities that he has undertaken throughout his life, including developing his considerable mechanical skills, developing his business and supporting a range of community activities in Palmerston.

For the past two years, Mr Service has ridden around Palmerston on his full-size tricycle.

Shopping, exercise and "easy travel" are his aims.

Mr Service, a retired partner in Warrens Garage, in Palmerston, was born and brought up in the Horse Range Rd district, north of Palmerston.

He had a considerable interest in tractors and delivered many new models to farms around Palmerston in the late 1920s and early 1930s.

Later, he returned to work on the family farm.

He then set up his own contracting business with farming clients throughout East Otago.

Towards the end of World War 2, Mr Service became a shareholder in Warrens Garage, in Palmerston.

Mr Service and his late wife Nell were married for 67 years.

He still "calls in" at Warrens Garage on most days.

His son Eion has taken over the running of the garage, which now includes a postal agency and shop.

Mr Service has supported a wide range of community activities in Palmerston.