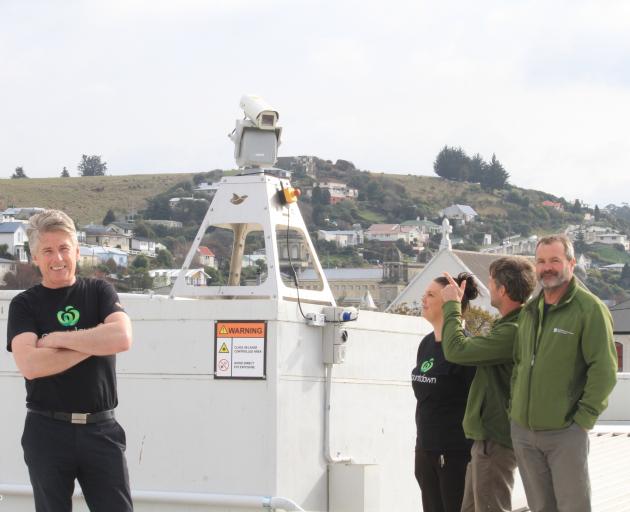 Woolworths New Zealand facilities manager Iain Widlof (left) shows Countdown Oamaru manager Stacey Newall, DOC ranger Tom Waterhouse, and Oamaru DOC community ranger Andy Powazynski just one of a suite of methods the central Oamaru business is using to keep its rooftop free of red-billed gull nests this year — a laser. From this week the business is now also releasing ozone gas to dissuade the protected birds from re-establishing a colony. PHOTO: HAMISH MACLEAN.
As evidence of the deterrents Countdown Oamaru is using to keep red-billed gulls from nesting on its rooftop mounts, the Waitaki District Council has begun its attempt to provide a "natural alternative" for the birds.

Woolworths New Zealand Ltd facilities manager Iain Widlof, of Wellington, said ozone gas was the latest tool the business had added to its toolbox of deterrents.

"It's a natural gas that's in the atmosphere anyway," Mr Widlof said.

"So, we're not creating anything poisonous. What ozone does is it interferes with the way a bird can breathe. So, it just makes it a little bit of an irritation.

"And anything that we're doing on this roof is making life just a little bit less comfortable for them. So they can choose to go somewhere else - a more natural environment."

The council earlier this week cleared boxthorn from a roughly 100sqm site in a remote corner of Cape Wanbrow, some distance from its well-used walking tracks.

Council staff also spread lime in the area to simulate the "whitewash" look that guano would have at an established colony site.

And the use of decoys and audio recordings of bird calls was possible as the council hoped to entice the birds away from Oamaru's central business district for the coming breeding season, council property manager Renee Julius said.

For the past few years the red-billed gulls that nested in the centre of the Waitaki town had been "solely up to the businesses" to deal with - but that approach had not proven effective.

"Council and the community need to work together to entice the birds to a natural nesting site," Mrs Julius said.

That included, she said, people stopping feeding birds on the street.

Mr Widlof confirmed "the birds are bringing up ridiculous things like cooked chicken bones from fast-food takeaways and things like that. And they're trying to build nests with it - it's so unnatural," Mr Widlof said.

"This is an environmental campaign, not some sort of witch-hunt. And we're trying to get these birds to relocate to a natural environment but away from this really unnatural place, called a Countdown roof."