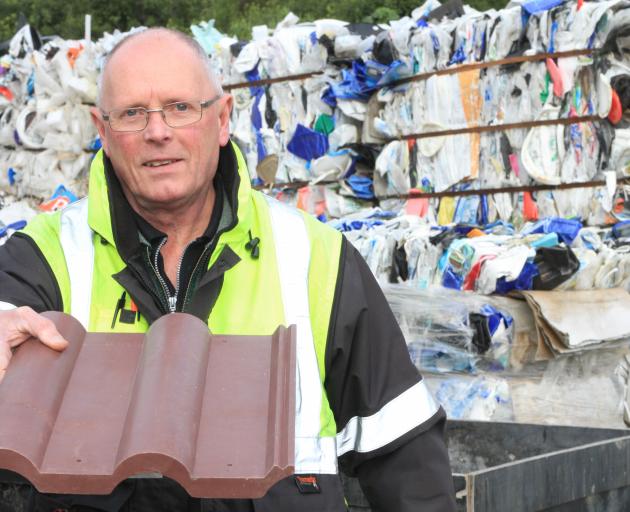 Waitaki Resource Recovery Trust manager Dave Clare holds a composite Roman roofing tile made in the Ukraine. Mr Clare says composite bricks for use on houses could be an Oamaru-made answer to the current plastic woes. Photo: Hamish MacLean
As the recycling crunch from China’s waste import ban hits and markets for recycled plastics dry up,  a Dunedin company is eyeing Oamaru’s resource recovery park as a possible starting point for a solution.

Polybuild project co-ordinator Rob Owen said the company planned to build a research and development site in Oamaru to "upcycle" plastic from the Waitaki Resource Recovery Park into a composite material.

Using even low-grade plastics, the company would produce building materials that could eventually be made  around the country.

The technology was pioneered in Russia and had been used in  small-scale operations internationally, but if it could be produced on a large scale, it could be a win for New Zealand environmentally.

"There’s nowhere for our plastic to go, and you’re not talking small amounts. You’ve got to do something that burns huge amounts of plastic if you’re going to recycle it within our economy. And it’s got to go somewhere - we intend it to go to building houses.

"In North Otago, we will  be designing and manufacturing the products. At this stage we’re about the material [but]  once you’ve made the material, you have got to make something from it. That’s what the R&D site in Oamaru is all about.

"The way you’re doing your recycling there, we don’t have to put a wash plant in, because it’s all coming to us clean. So we can take a whole lot of cost out of it."

The Oamaru material was preferable to Dunedin’s recycling, as it was hand-sorted and clean, with lower levels of contamination.

Waitaki Resource Recovery Park trust manager Dave Clare said demand for recycling had  its ebbs and flows, but "long term, there will need to be major, major, major changes".

"The Chinese have made the world sit up and say ‘this plastic thing is something we can no longer pretend we’ll fix’," he said.

"They have stopped the plastics, because of the contamination. Essentially, they became the rubbish tip of the world."