Rabbits back after theft

A spate of thefts in Glenavy, north of Oamaru, has shocked residents, and one group has taken matters into its own hands.

Over the past few weeks, Glenavy School and the Glenavy Cricket Club have been targeted. Property, cash and the school's pet rabbits were stolen in a crime spree described by school principal Kate Mansfield as the worst seen in the township.

She said on April 29, the school's grounds were entered and two rabbits, a rabbit hutch, gardening tools, a bicycle and sports equipment were stolen.

The rabbits and hutch were recovered by police and returned to the school the following day, the bicycle last week and the tools this week.

However, on May 1, staff arrived at the school to find the hutch vandalised and the rabbits loose on the school's grounds, leaving pupils ''devastated'', Mrs Mansfield said. 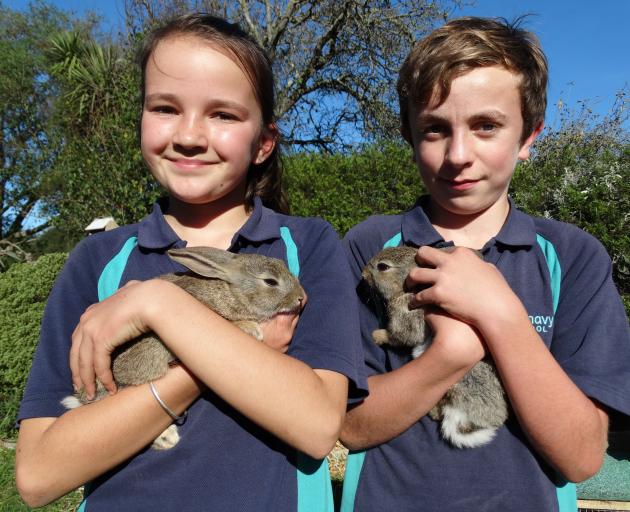 Glenavy School pupils Anna Mansfield (11) and Reuben Dann (11) with the school's pet rabbits, Thumper and Clover, that were stolen and then recovered recently. Photo: Daniel Birchfield

Sergeant Kevin Reynolds, of Waimate, said two Christchurch men staying in Glenavy had been arrested and charged in relation to the school thefts.

At the Glenavy Cricket Club, alcohol, cricket gear, cash, audio equipment, clothing, hats and about 20 years worth of scorebooks were stolen sometime over the past month.

A bat that belonged to the late Marshall Smith (32), a club representative who drowned in the Waitaki River while kayaking in October 2016, was also taken.

A club member, who did not want to be named, said several members of the club suspected they knew who was responsible and recently confronted a man at a Glenavy property and demanded the stolen items be returned.

The ''raid'' was filmed and posted to the club's Facebook page.

''We found out a few days ago that the clubrooms had been broken into ... we thought we would go around and politely ask for our stuff back. We played it by the book.

''To steal from anyone's bloody low but to steal from a club or a school, you're really scraping the bottom of the barrel. We can go and buy another box of beer ... but those scorebooks, we can't replace them.

He said ''about half'' of the stolen items had been recovered.

However, Sgt Reynolds, who said the investigation was ongoing and no arrests had been made, was not impressed by the club members' actions.

''They have done what they've done and I don't condone it, that sort of behaviour. It's not something people should be doing.

''I can understand people get frustrated at times, but when you start taking the law into your own hands ... you don't know what's going to happen.''

Sgt Reynolds said any burglaries needed to be reported to police as soon as possible.

''It could form part of a bigger picture.''