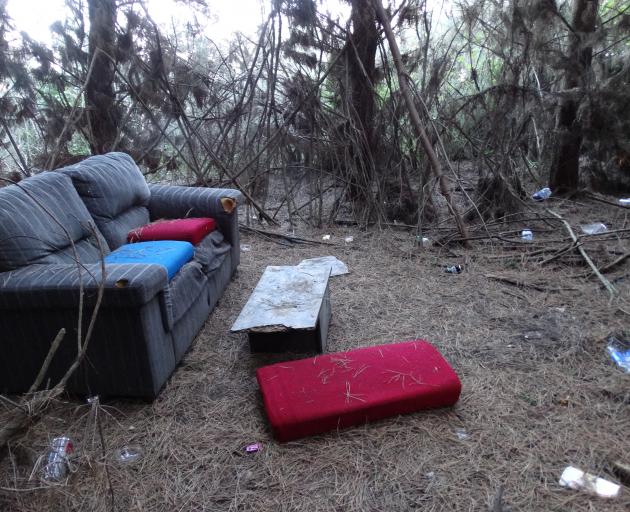 Rubbish left behind at an area near the Reservoir Rd mountain bike track in Oamaru. PHOTO: DANIEL BIRCHFIELD
Mountain Biking North Otago members are becoming increasingly frustrated at having to pick up rubbish left behind by those who have created a "hangout spot" near one of the Oamaru tracks the group maintains.

Over the past several years, Mountain Biking North Otago has built three tracks - at Cape Wanbrow, Herbert Forest south of Oamaru and in Reservoir Rd - which it maintains regularly.

Last weekend, Mountain Biking North Otago member Margaretha Engles, of Kurow, was walking along the Reservoir Rd track, which is on Waitaki District Council-owned land, with her son when they branched off the main track near the car-parking area.

The pair then discovered an area, about 20m away from the main track, where a couch and a small table had been set up.

Ms Engles was dismayed to find rubbish that included plastic and glass bottles, cans and fast-food packaging strewn around the area.

She described the find as "shocking" and implored people to clean up after themselves, rather than relying on others to be good enough to do the job for them.

"My first reaction was it's meant to be a hangout spot, but why don't you take your rubbish with you when you go?

"It's just a total lack of respect for the environment and the community."

Mountain Biking North Otago president Andrew Milne had no issue with people using the area as a gathering point, but was disappointed by the amount of rubbish being left behind.

"The sofa doesn't bother me at all, but the rubbish is obviously a concern . . . but it's pretty hard to police.

"It's frustrating because it's often volunteers from our club who are cleaning it up."

Waitaki District Council recreation manager Erik van der Spek said questions needed to be asked as to why the couch was there and who was responsible for it.

There were no rubbish bins in the car-park area or on the track, he said.

Mr Milne said the issue did not directly affect the track itself and no similar issues had been noted at Mountain Biking North Otago's other tracks.

This is absolutely not surprising in the Waitaki district where there is no kerbside recycling, the dump just shut, disposing of waste ethically is almost impossible for those not on a salary.
As the article says, there is no rubbish bin there. People are almost forced into dumping as they simply cannot afford to do anything else. WDC needs to get its act together, increase rates and provide a cheap solution for the ethical disposal of waste.