By Kayla Hodge
0 Comments
After trekking through the Otago mountainside for 25 years, you would think Taieri Hore had a tale or two to tell.

But the Goldfields Cavalcade veteran’s lips are sealed. 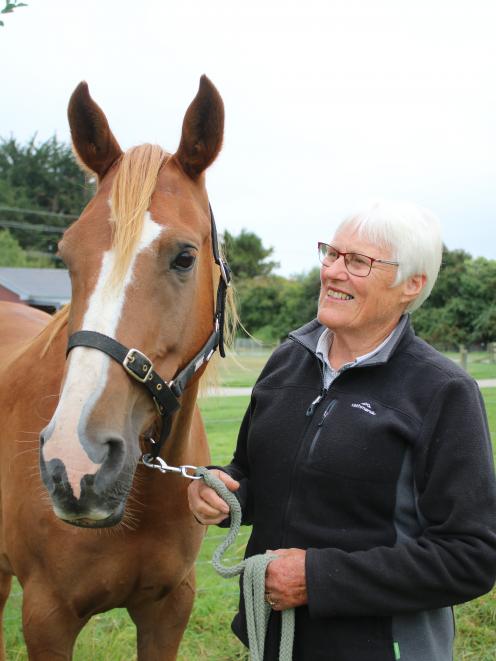 Kurow’s Taieri Hore (74) and horse Copper are setting off on the Goldfields Cavalcade today; it will be Mrs Hore’s 25th event.PHOTO: KAYLA HODGE
The 74-year-old sets off today with her Tussock Creek light harness trail — one of the many trails in this year’s cavalcade — and she felt fortunate to be fit enough to be completing her 25th journey.

The Kurow woman would ride the trail with her horse Sandy, who she had only owned for six weeks, as her husband Neil Mckerchar pinched her horse Copper for the trail.

After finishing 14 cavalcades with former horse Kizzi, and seven with Chillum, she was struggling to find a replacement.

"Kizzi spoilt me, and Chillum — I haven’t found that special horse yet."

The cavalcade evoked many memories for Mrs Hore, from driving four Tennessee horses and possums on toilet seats to the Oamaru Scouts Group catering.

Things had changed through the years, though; the riding days were shorter and the group no longer "roughed it".

"It was pretty unusual to get a shower.

"You used to have a bucket shower for the week, and now we have showers and toilets that come with us — it’s quite different."

It was the horses, country and people that got her back in the saddle each year.

"We become a cavalcade family really, with like-minded people and their horses," Mrs Hore said.

"It’s the horses — I would ride every day if I could.

Riding her horse was her favourite thing to do.

They shared a strong connection.

"It’s just you and your horse, [it’s] being kin with your horse.

"There’s a saying ‘there’s nothing better for the inside of a man than the outside of a horse’."

Mrs Hore began riding at preschool and by the time she was 10, she was helping drive horses from Pleasant Point to the Temuka saleyards.

Pony clubs dominated her life and she went on to be an instructor, a certificate examiner and judge for both pony club and dressage events.

She was the first person to import Connemara ponies to New Zealand. Later in life her focus turned to endurance riding, and cavalcades.

There were 140 people travelling from the North Island — the largest contingent — and all trails were full.

He believed heading into new country trails and finishing in Twizel for the first time had helped boost numbers.

"And the fact that people can’t travel overseas, they don’t mind spending a bit more money on a local travel experience.

"It’s going to be a huge weekend in Twizel next weekend."