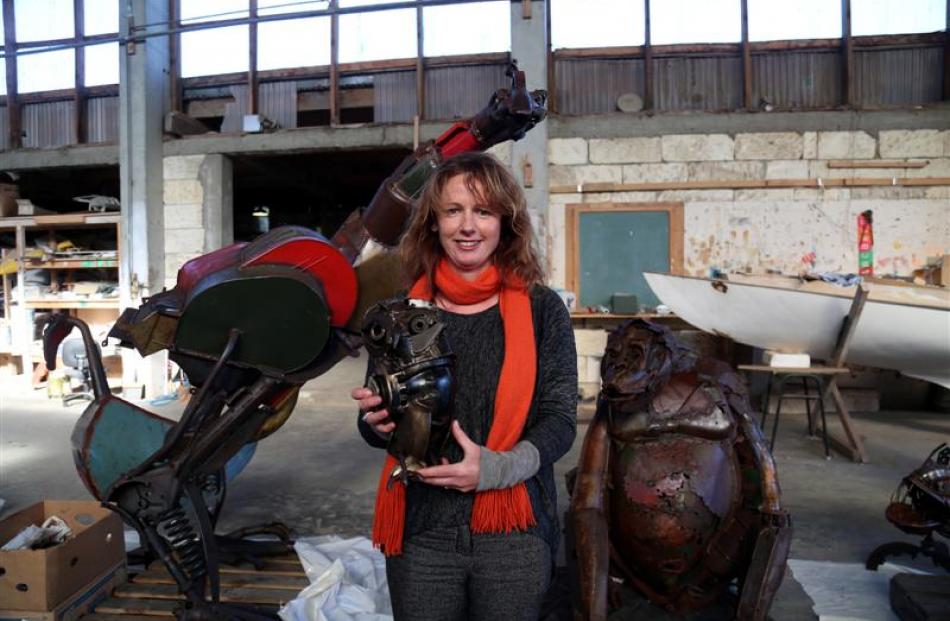 Steampunk HQ co-ordinator Jan Kennedy prepares for the opening on Friday of ''Recycled Relics'', an exhibition of sculptures by Chris Meder. Photo by Rebecca Ryan.

A ''very special'' exhibition in honour of the late Chris Meder opens to the public at Steampunk HQ in Oamaru this week.

''Recycled Relics; sculptures by Chris Meder'' opens on May 29 and will run until August 30. It includes a range of the Dunedin artist's sculptures made from recycled, old, worn-out pieces of metal.

Meder died in 2010, just a week after his 39th birthday and 10 days after the birth of his daughter, Olive.

Most of his work was pulled from public viewing.

''Prior to his death, Chris Meder was at the forefront of the sculpture scene in New Zealand,'' Steampunk HQ co-ordinator Jan Kennedy said.

He transformed old car parts and scrap metal into animated creatures that displayed real personality and form - his ability to give them gesture and expression was ''uncanny'', Mrs Kennedy said.

Meder's artistic talent was also recognised in the film industry, where he worked behind the scenes on several movies filmed in New Zealand including King Kong (2005) and The Lord of the Rings trilogy (2001, 2002 and 2003).

He also played a part in the start of the Steampunk movement in Oamaru.

His sculptures Bosca the Gorilla and Chopper Holland were highlights of the first Steampunk Art Exhibition at the Forrester Gallery in 2009.

He left a visible legacy in Oamaru with his eye-catching creation Chopper Holland, the giant Steampunk motorbike.

Last year, Mrs Kennedy was introduced to a friend of Meder who had a large private collection of the sculptor's work. He thought the time was right for a public exhibition and said Steampunk HQ was the perfect fit.

Meder's family agreed, and Steampunk HQ organised for works to be shipped to Oamaru.

Mrs Kennedy said Steampunk HQ was ''incredibly lucky'' to be able to display a series of Meder's best works, which had come from his family and some local collectors.