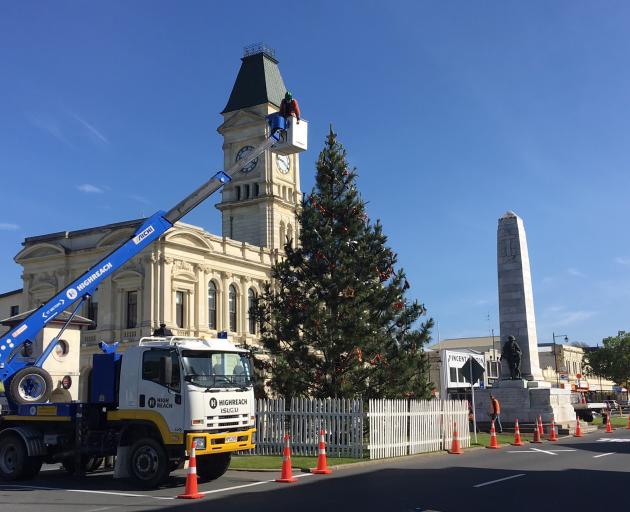 Some locals are questioning why the WDC needed to switch from its traditional natural trees (above) to plastic imitators. Photo: Hamish MacLean
The Grinch has not stolen the Waitaki’s Christmas, after its district council yesterday agreed to spend $57,000 on three new artificial trees for the region.

The spend had proven controversial, some locals questioning why the WDC needed to switch from its traditional natural trees to plastic imitators, while others asked if such expenditure of ratepayer money was necessary.

Council finance and corporate development group manager Paul Hope said the live trees were often difficult to decorate and, as they were on display for a month or more, could start to look a touch shabby.

"The reality is that putting formerly live trees up for a while, many of them are of marginal quality and don’t last particularly well.

"What is proposed here is to follow an approach which many other districts have now taken, which is to have really high-quality artificial trees to help the community get into the festive spirit."

The main tree, to be sited in Oamaru, was 10m tall, with smaller trees for Kurow and Palmerston.

The expense included decorations and storage costs, but some of that was being co-funded, Mayor Gary Kircher said.

"This will be a great long-term solution that people will appreciate ... size doesn’t matter, but Waimate’s tree is only 7m, so we win."

Councillor Melanie Tavendale said council staff put a great deal of effort into the district’s Christmas displays and were regularly blasted for it.

"I think it is demoralising for them and we’ve certainly had the interest and the wish to do better . . . Christmas is a really special time, and this place looks amazing when we do it right, so it’s good to see us investing in this."

Plastic councillors might do better? I bet they would not spend that $$ on reforestation in the local area.

The community spirit. What Spirit? Greed, selfishness? Christmas is a crass fake celebration that no evolved society would tolerate. Spending other people's money on fake trees does however seem appropriate.