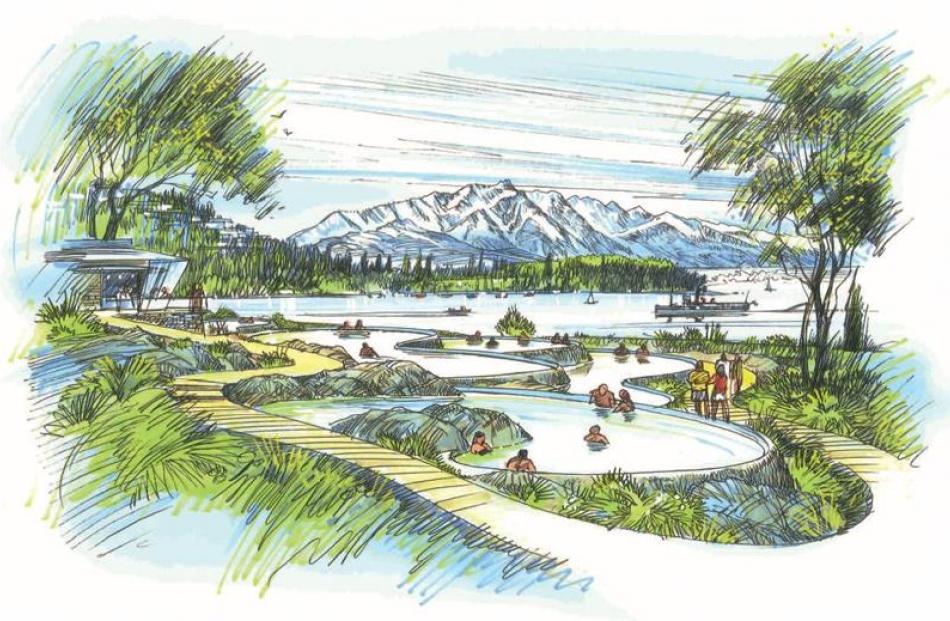 A $25 million hot pools complex is one of two major private commercial developments being considered for alongside a proposed Queenstown convention centre.

The project will be discussed at the Queenstown Lakes District Council's Thursday meeting.

NTT, a subsidiary of Ngai Tahu Holdings Corporation, wants to lease about 0.75ha of council-owned land for the hot pools complex at Lakeview, the preferred convention centre site on a terrace above the central business district and overlooking Queenstown Bay.

The complex would include about 12 large public hot pools, four smaller private pools, changing facilities, a health spa, a reception and retail building, and a cafe/restaurant area. At peak capacity, it could cater for an estimated 300,000 to 350,000 customers a year.

''Their interest in the site is reasonably long-standing, but the specifics about what the proposal might be is relatively new,'' Mr Feeley said.

''We've got to the point where we understand roughly the amount of land they're looking for, the location where they would like to be and, at a very broad level, the kind of commercial terms which might exist between us and them.

''They think it's a good opportunity; we think it would work well with the other developments being contemplated and we're now going to take the step to see if we can actually reach an agreement.''

The council is also considering another recreational business opportunity for Lakeview with an as yet undisclosed company.

The second company wanted to remain anonymous for commercial reasons, but it was potentially viable for both projects to be developed next to the convention centre, Mr Feeley said.

''After a day out in the `Adventure Capital of the World', soaking in a hot pool and taking in the amazing lake and alpine views will be an unforgettable experience for domestic and international visitors,'' Mr Kennedy said.

''Ngai Tahu Tourism has proven expertise to realise a high-quality development such as the proposed Queenstown hot pools, as seen with our multimillion-dollar Glacier Hot Pools at Franz Josef, which opened in 2008 and is a very similar operation, albeit on a smaller scale.''

The council has not formally resolved to develop a convention centre but is investigating the issues that will be taken into account in its decision next year.

These include the best mix of uses, the site's zoning, the need for additional infrastructure, and the ownership of the land and facilities.

The master plan put forward for council consideration this week has three main elements: a convention centre and two commercial recreational operations along the frontage of Thomson St; a mix of commercial and residential areas at the back of the old Lakeview campground; and a market square.

Councillors will decide whether to authorise Mr Feeley to progress negotiations with NTT and other potential commercial developers, including Sky City, and report in February.

A comprehensive report on financing and rating impacts for the project will be delivered next March.