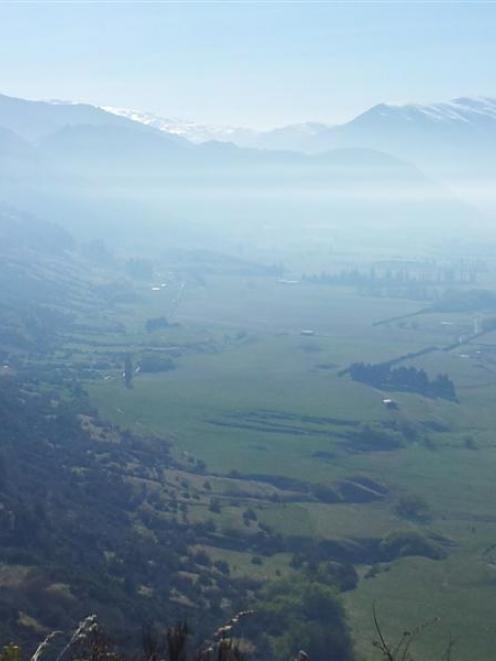 The normally picturesque view from Coronet Peak towards Arrowtown was ruined by smoke from permitted controlled burn-offs on Wednesday. The Otago Regional Council says it will be looking at ways to address the 'significant issue', which causes problems across Central Otago and around Dunedin. Photo supplied.
The Otago Regional Council had no ''quick fix'' to remedy air pollution caused by outdoor burn-offs - described as a ''significant issue'' across the Otago and Central Otago regions.

ORC air quality scientist Deborah Mills, of Dunedin, told the Otago Daily Times yesterday the council would be discussing options in the coming weeks, which would likely include educational sessions with farmers.

However, Queenstown Lakes District Council principal rural fire officer Gordon Bailey said burn-offs had been a practice in the Wakatipu for ''100 years or more'' and it was a ''necessary part of many farming operations''.

While there had been more burn-offs recently, Mr Bailey said that was due to the favourable conditions and he had no opinion on the ORC's plans to identify potential alternatives.

The Wakatipu basin has been under clouds of smoke for several days this week, the result of burn-offs on farmland around the area.

The same problem had been experienced in Cromwell, Clyde and Alexandra recently, Ms Mills said.

While the ORC had removed its monitor from Arrowtown, due to construction, images taken from Coronet Peak on Wednesday appeared to be more pollution than the National Environmental Standards allowed, she said.

''It looks similar to ... a forest fire a few years ago outside of Dunedin.''

However, some residents had questioned the practice given the ORC had recently introduced its Clean Air Warm Homes Assistance programme, required by the Ministry for the Environment, focusing on clean heating appliances which, in part, improved air quality.

From January 1, 2012 only woodburners meeting standards approved by the MfE were permitted to be installed in homes in the ''Air Zone 1'' category - Alexandra, Clyde, Arrowtown, Cromwell and Milton.

''I understand residents thinking: 'We're doing our bit, what about everyone else?'

''Yes, residents are doing their bit ... now we've got to look, again, at this issue of outdoor burning and say: 'Is this acceptable, or are we going to do something different?'

''There will be talks in the next couple of weeks about ... where we go from here.''

There were alternative options for farmers including composting and chipping.

Ms Mills said both options were more time-consuming and costly, however, ''that is probably always going to be the argument''.

''We need a closer relationship with TAs [territorial authorities] around this issue ... we might need to look at when things should be permitted and not permitted.''

Exacerbating the issue in the Wakatipu this week was a weather pattern including a ''big high pressure just sitting around''.

For farmers that weather pattern was ideal, with little wind to risk an out-of-control burn, however, it also meant the smoke was ''just not moving'', Ms Mills said.

''It's fair to say it's been a little bit on the backburner because we've had such a strong focus on the clean heat, clean air programme - getting the towns and residents really focused on that effort.

''It's always just been in the background, but it is coming to the foreground.

About 40ha of land was destroyed after the fire jumped a break, established by land owner and permit holder Mike Mee.

Mr Bailey said ''most of the costs'' associated with fighting the fire would be met by Mr Mee.