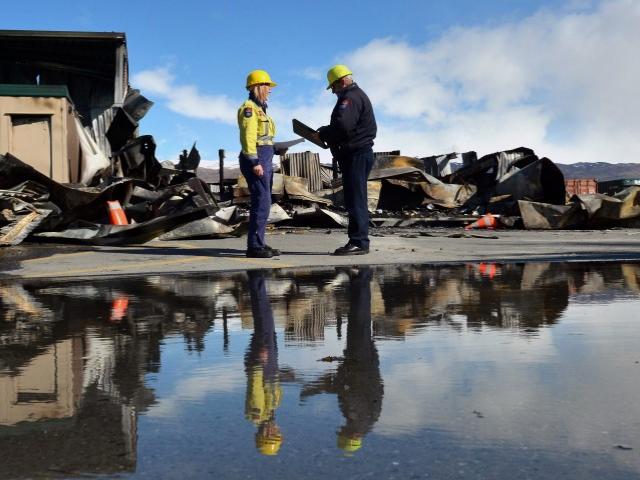 ''I really believe something good can come out of the ashes ...'' Ruth McNamara said.
The Waitaki District Council assets committee has recommended the Urban Fire Prevention Bylaw 2009 be revised to align with different boundaries.

There will be no prosecution taken by the Otago Regional Council in relation to a burn-off at Hillend Station, Wanaka, last October, despite many official complaints about smoke from the fire blanketing the town.

A suspicious fire which destroyed two parked vehicles in St Clair, Dunedin, at the weekend was ''ugly and devastating for the owners'', Detective Iain Ferguson said.

Firefighters battle a burning race car parked in front of a Leith St, Dunedin, flat, just before 5.30am yesterday.

The Otago Regional Council had no ''quick fix'' to remedy air pollution caused by outdoor burn-offs - described as a ''significant issue'' across the Otago and Central Otago regions.

A spate of suspicious bin fires across Dunedin continues, with a further three over the weekend.

A smoke alarm in a house bus is credited with saving the life of a Dunedin man early yesterday.

A burning classroom at Kavanagh College and a fire at the Green Island landfill - initially feared to involve dangerous chemicals - had Dunedin firefighters scrambling to respond over the weekend.

In a panic as fire and smoke swirled through her home, Patricia Reid heard a booming voice in the darkness imploring her to jump.

Queenstown police are appealing for witnesses to a fire they are treating as "potentially suspicious" which destroyed the upper storey of an unoccupied Glasgow St property early on Saturday.

A fire which threatened a home and destroyed 1500ha of mainly scrub, tussock and forestry near Hyde over the weekend, was started by a controlled burn.

A smoke alarm is credited with saving the life of a sleeping Dunedin night-shift worker yesterday afternoon.

Two burning teenagers fled a house fire after the gas bottles from which they were allegedly "huffing" exploded in Mosgiel yesterday afternoon.
A wooden clothing bin outside a Salvation Army store was set alight in a suspicious fire early yesterday.

Central Otago firefighters were called to three fires within 12 hours yesterday, at Kokonga, Clyde and Alexandra.