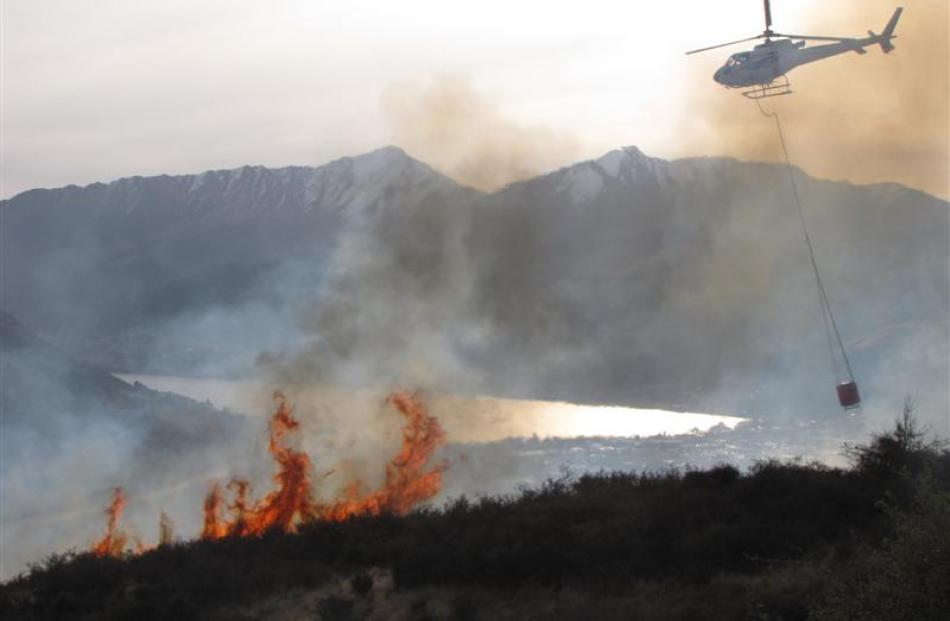 A helicopter attacks an out-of-control burn-off, covering an estimated 40ha, near the Remarkables ski area access road, near Queenstown, yesterday afternoon. The fire, which began as a controlled burn, was reported out of control just after 3pm...

The council's principal rural fire officer, Gordon Bailey, said about 40ha of land was affected by the fire after winds fanned a permitted burn-off.

At its peak, the fire was about 10m from the roadside.

The road was closed for about an hour and a-half as a precautionary measure, temporarily stranding skiers and snowboarders up the mountain.

Mr Mee alerted authorities just after 3pm yesterday that the fire was out of control.

''It was quite damp underneath and what's happened is when it's dried out a little bit more it's [gone] on fire again.''

Members of the Frankton Volunteer Fire Brigade attempted to dampen the area closest to the road, while the fire was fought from the air by four helicopters - two each from Glacier Southern Lakes and Heliworks - with monsoon buckets.

Two rural fire ground crews also worked to dampen the flanks of the fire, which was about 4km up the access road.

By 6.30pm the fire was under control with no signs of smoke and it had been ''handed back'' to Mr Mee to monitor, Mr Bailey said.

While there would be an investigation into the fire it seemed ''pretty obvious'' what the cause was.

The council would ''certainly'' look to recover associated costs. However, it was unlikely Mr Mee would face prosecution.