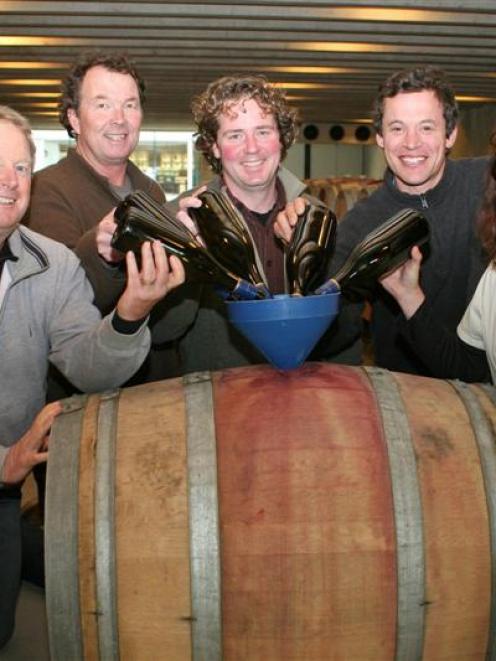 Terry Stevens, from Wild Hare Wines, Greg Hay, from Peregrine Wines, and winemakers Sean Brennan (Brennan Wines), Chris Key (Gibbston Valley Wines) and Jen Parr (Waitiri Creek Wines). Photo by Emily Adamson.
Still maturing in barrels, the 2009 Gibbston pinot noir vintage is expected to be one of the best in more than a decade, and the valley's 16 individual wine growers and producers are getting together to produce a rare blend to publicise the distinct regional flavour.

Wine production has become the backbone of the Gibbston sub-region and the almost unexpected quality of this year's vintage has been a spur to make what could become one of the region's most sought after wines to date - the Gibbston Red Trial or GRT.

Modelled on the acclaimed results of the 1997 Penfold's Red Wine Trial of shiraz collected from Australia's Barossa Valley, the GRT looks to encapsulate the "ballerina component" which Gibbston is becoming known for, Peregrine Wines marketing director Greg Hay said.

"It is very pretty and feminine . . . which is what pinot noir is about.

"The 2009 vintage, which is in the barrel at the moment, is looking like one of the most exceptional harvests yet," Mr Hay said.

As well as having the opportunity to showcase the qualities of their region, there was another reason all the valley's growers and producers were keen to join in.

The wine will be auctioned "en premier" - before it has left the barrel - next month as part of a fundraising drive for the Gibbston River Trail.

The trail is expected to be a huge boost for the area, giving visitors a chance to stop and appreciate the rugged landscape, the gold mining history of the area and also the wine grown in the world's southern-most wine-producing region.

Mr Hay said everyone was aware of the benefits for Gibbston and the labels produced there.

The growers certainly worked hard for this year's vintage - viticulturalists were kept busy throughout the 2008-09 growing season to ensure grapes ripened in what they thought would be an early winter.

"The trickiness was not knowing how long [the warm growing season] would go for but it was a much longer season than people had anticipated," he said.

The work was well worth it, with the wine showing signs it would exemplify the elegance and finesse for which Gibbston was becoming famed among the discerning pinot noir aficionados, he said.

The growers will contribute 25 litres each of the best pinot noir exclusively grown in Gibbston for the GRT, and Peregrine winemaker Peter Bartle will set to work blending it with the aim of producing a fine example of Gibbston's "terroir" - the flavour characteristics due to the soil.

Mr Hay said although Gibbston was a sub-region of Central Otago, different growing conditions and terrain meant there would be a variety of flavour for Mr Bartle to work with.

"Some grapes are grown on the flat, some on the slopes . . . there will be 16 different profiles - like 16 different colours to paint a picture," he said.

"With one vineyard, we could paint a blue canvas; with 16, we can paint a landscape."