Home after seven-year adventure at sea 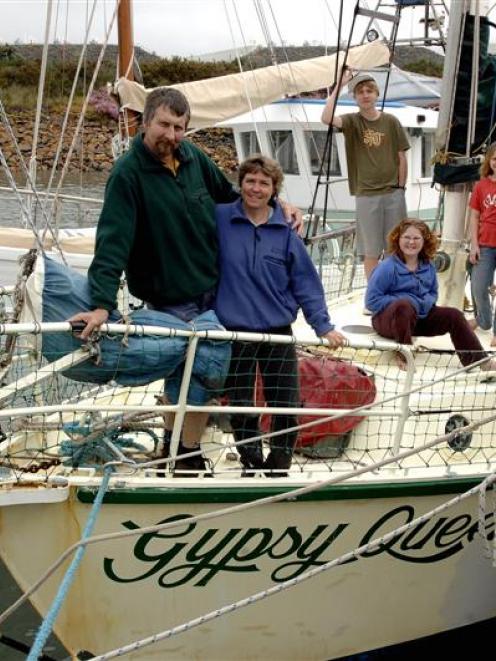 The Koch family (from left) Robert, Tina, Philip (13), Janelle (11) and Harriet (9) are planning to come ashore in Dunedin after seven years of cruising.
A Glenorchy family who have spent almost seven years afloat on their yacht Gypsy Queen are about to begin a search for a new place to live - this time on dry land.

The Koch family, Tina and Robert and their children, Philip, Janelle and Harriet, arrived in Dunedin from Hobart earlier this month, ending a voyage that began in Otago Harbour in 2002.

Their 13.5m steel yacht, built by Dunedin sailing identity Lou Vorgers, has been their permanent home as they travelled, and worked, along the coastlines of Australia, Papua New Guinea, Indonesia and Malaysia.

Mrs Koch said the family regarded their yacht as more the Holden stationwagon of the sea than the Rolls Royce, but it had been "solid and dependable" and had recently weathered rough seas off Australia, with 6m-7m swells and 50-60 knot winds.

The family sold part of their Glenorchy farm to buy the yacht and fit it out for their trip.

Living on board had become just part of their normal life, she said.

They had become used to conserving battery power and the children always enjoyed lighting the kerosene lamps.

They were equally economical with fresh water - going without showers and washing in a bucket.

There had been encounters with orangutans, elephants and turtles and with "truckloads" of floating rubbish along the Indonesian coast.

On one occasion, there was a motorcycle trip back to the yacht with dinner - in the form of a goat - as pillion passenger.

"But better than nothing," Janelle said.

There had been nervous encounters with incorrectly lit boats in the dead of night and Mrs Koch said they were once boarded, in pitch darkness, by someone trying to steal their outboard motor.

Mr Koch chased the man off the yacht.

There had been hours of swimming and snorkeling in warm waters and many large and unusual fish caught.

The family had also spent more than two months cycling through Vietnam and Laos.

The children had completed correspondence school lessons, but Mrs Koch, a nurse, said the time had come for all three to go to school.

The family intended finding a house in Dunedin.

Harriet had spent only two or three months of her nine years living in a house.

Although the original intention was to sell the yacht and use the money as a deposit, it will be moored at Deborah Bay and be used for trips to destinations closer to home, such as Lyttelton and Stewart Island.

Skifields’ snowmaking guns at the ready