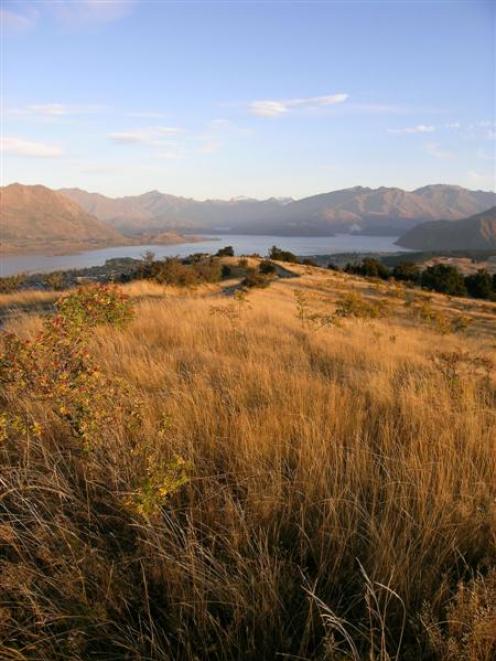 Lake Wanaka seen from the top of Mt Iron. Photo by Marjorie Cook.
Senior Sergeant Allan Grindell, of Wanaka, is increasingly concerned about the behaviour of a man or men reported walking naked on Mt Iron or behaving indecently in town, and is keen to put a stop to the behaviour as soon as possible.

The police are appealing for help in identifying a man who behaved in a "quite concerning" and suggestive manner towards a woman on the corner of Ardmore and Helwick Sts on Monday night.

Snr Sgt Grindell said yesterday two new reports of a naked man on the Mt Iron walking track were also received about 10.30am on Saturday morning and 9.20am on Monday morning.

These follow reports of a naked tramper in the Mt Iron and Outlet Track areas during December.

Snr Sgt Grindell said it seemed the police could be looking for two men, because of differences in the way they had reportedly operated.

Monday night's incident involved a man, described as in his 30s, wearing dark trousers and a button-up flannel shirt, who had approached a woman on the corner of Ardmore and Helwick Sts about 11.20pm.

The man had made a suggestive comment to the complainant while his penis was hanging out of his trousers, Snr Sgt Grindell said.

"We did an area patrol and couldn't find that person ... It would be good to find them both. This one [on Monday night] was quite concerning," he said.

In December, several reports were made about a naked tramper described as in his 40s, with a backpack, cap and shoes.

In Saturday's Mt Iron incident the naked tramper was not reported to have any possessions with him and was described as in his 30s.

Snr Sgt Grindell said the naked man walked past a woman going up Mt Iron on the Albert Town side and went into some kanuka bushes.

"He was a caucasian, about 30 years old, with a beard and short hair. He was tall, of average build. He ducked back into bushes when another male walker appeared. There has been no suggestion of any indecent acts.

This one seems to be more of a show man," Snr Sgt Grindell said.

In Monday's Mt Iron incident, a woman told police she had been walking the track on the Albert Town side and was asked by a male walker if she had seen the naked tramper because another woman had just seen him.

Snr Sgt Grindell said police would like to hear from anyone who had seen the man.

The 4.5km Mt Iron walking track is managed by the Department of Conservation and is one of Wanaka's most popular tracks.

The rocky knoll rises 240m and gives panoramic views of the district.