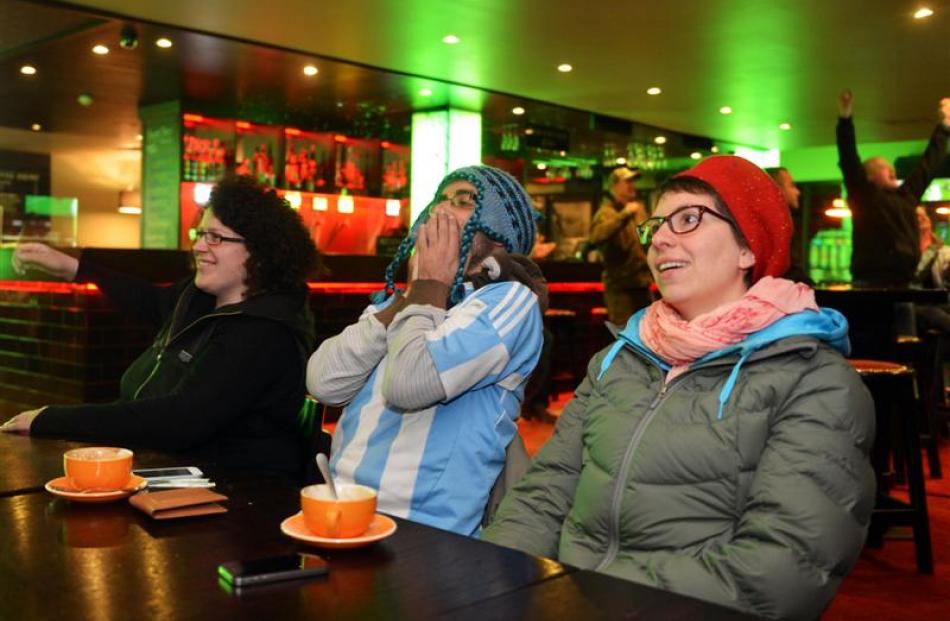 A small but passionate group of rugby fans gathered at Wanaka's Water Bar early yesterday to watch the game between the All Blacks and Argentina. Wanaka resident Leandro Baud (centre), of Argentina, dared to hope for a period, as his home team led the...

It was a low-key start for Queenstown and Wanaka bars screening the All Blacks' first Rugby World Cup match yesterday.

Senior Sergeant Paula Enoka said it was a quiet morning for the additional crime prevention and road policing staff rostered on in Queenstown for the 3.45am game.

There were no arrests for bad behaviour or drink-driving. Officers had visited bars to check liquor licence requirements were being met.

At least two of the 11 bars allowed to screen games in the resort did not open.

It was an ''excellent'' start as far as police were concerned, but fan numbers were expected to rise significantly as the tournament progressed, Snr Sgt Enoka said.

''Monday morning's a hard one, even if it was the All Blacks.''

He expected more interest for the All Blacks' next three matches because they were screening later, at 7am or 8am.

In Wanaka, about 20 die-hard rugby fans gathered at the Water Bar to watch the All Blacks play.

The bar's general manager, James White, said ''a few people'' were drinking alcohol but most opted for coffee at that time of day.

The bar also opened for the England-Fiji match from 7am on Saturday.

About 65 people watched that game.