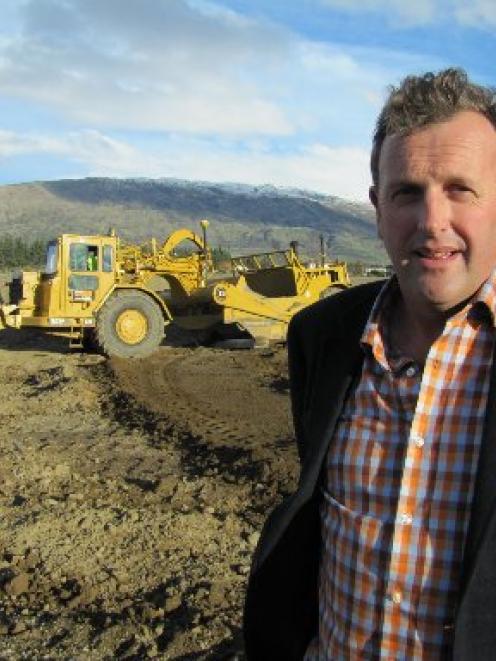 Three Parks, is the biggest single development in Wanaka's history and could take 20 years to complete.

One of the two half-million-dollar scrapers he has imported from the United States has begun preparing commercial sections, following GPS signals rather than pegs in the ground.

The next step will be to form a 1.8km avenue through the centre of the development from State Highway 6 to Ballantyne Rd that will become a loop road around the existing town and will be open to the public next year.

Mr Dippie said he had a name for the avenue in mind but could not divulge it at this stage.

The idea for Three Parks evolved from workshops in 2002 looking at how Wanaka's future growth could be accommodated. The workshops produced a document called ''Wanaka 2020''.

''You could see what had happened in Queenstown,'' Mr Dippie said.

''There were some good things and some bad things that happened over there; so you had the luxury of looking at that.''

''It was important to just ease back on the project, slow it down, grow with Wanaka organically ... not forcing a big development on the town.''

But two years ago, Mr Dippie made the decision to go ahead.

''We could just see some signs of the economy picking up and we were getting some good inquiries from people who wanted to locate out here and we knew then 2014 would be the year to start the project.''

Mr Dippie said there had been a lot of interest in commercial sites and he was ''just starting now to put some firm sales in place''.

Mr Dippie did not consider the commercial elements of Three Parks would compete directly with businesses in Wanaka.

''It's only going to compete with Queenstown and Alexandra and Dunedin and further afield.

''You bring a Warehouse, for example, to Wanaka and who is it really going to compete with? ''Because a whole lot of that product is not even sold here.''

And he believed developing Three Parks progressively, would reduce the impact on existing businesses in Wanaka.

''We could have started this project five years ago, when things were pretty tough for business in Wanaka, but I think now there's enough buoyancy around. And, of course, a lot of local businesses want to re-establish to better premises.

''When we get local business people who want to expand we need to be looking after their interests first, giving them priority and that's certainly what we have been doing.''

Wanaka's Mitre 10 store was ''overflowing'' its Anderson Heights location, Mr Dippie said and he knew his brother Martin ''would love to come and build a nice, new, latest-generation Mitre 10 store out here''.

Mr Dippie said Three Parks would be developed stage by stage, as demand dictated, rather than having large areas of empty sections with ''tumbleweeds blowing across them''.

He expected to spend about $10 million-$20 million over the next five years.

The development is being done by his company, Willowridge Developments, which he described as well-established.

''I think the community and the council have a lot of confidence around our company's ability to do such things.

''There are a lot of developers that had projects that had too much debt and they're not around now and neither are their projects.

''There are plenty of examples of that but we would like to think we are a lot more conservative than some developers.''

While the initial development will be in the commercial area, Mr Dippie said within ''a couple of years'' Willowridge was likely to be ''out of stock'' of sections for sale and that would lead to the development of the residential part of Three Parks.