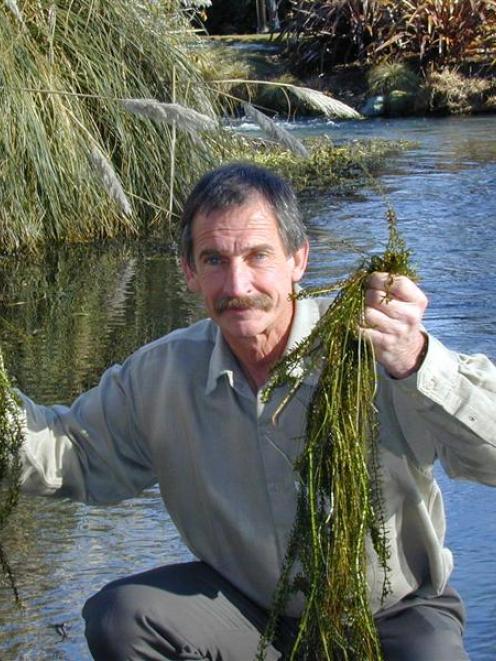 Aquatic plant scientist Dr John Clayton displays lake weed pulled from Bullock Creek, in Wanaka, in 2004. Photo from ODT Files.
A nationwide lake weed control programme carried out by Land Information New Zealand is having a positive impact on the health of some of Otago's lakes, particularly Lake Wanaka.

The programme is carried out by Land Information New Zealand, in conjunction with local councils and community groups, and represents an ongoing government investment of more than $600,000 a year to control lagarosiphon and hornwort in specific New Zealand lakes.

''Lake Wanaka is a good example of there being noticeably less lagarosiphon this year when compared to 2012. A combination of suction dredging, hand weeding and herbicide control has been used by divers at the lake.'' 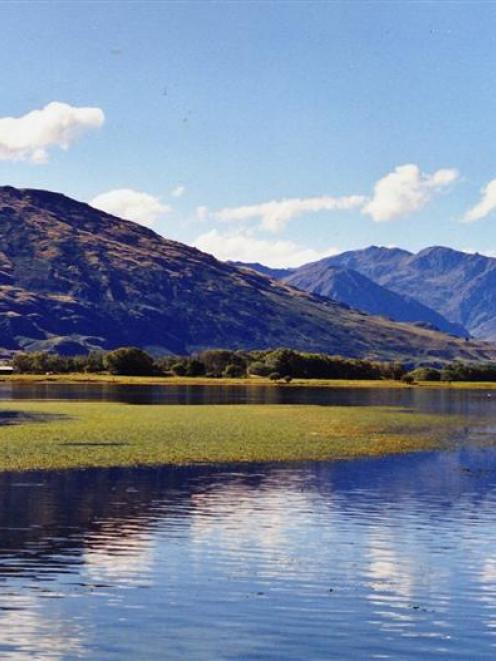 Lagarosiphon in Paddock Bay, Lake Wanaka, in 2001. The bay now boasts clear water after the lake weed was cleared by the Lake Wanaka Lagarosiphon Management Committee. Photo by NIWA.
The committee also receives scientific advice from the National Institute of Water and Atmospheric Research (Niwa).

''As a result we're proposing to reduce the size of our containment area, by moving the containment line approximately 6km towards the south end of the lake,'' Mr Naik said.

Linz expected to assess Lake Wanaka's 10-year management plan next year to consider an ongoing strategy for the future management and control of lagarosiphon in the lake.

The timing of Linz's lagarosiphon control work is dependent on several factors, including weather and water conditions, which can affect the success of the work.

At Lake Benmore, unusually high rainfall this year has limited control work. Monitoring is planned for later this year to help determine what level of further control work is required and where.

The focus for Lake Dunstan is on controlling lagarosiphon in areas of high use.

''We've successfully kept these areas, such as boat ramps located around the lake, clear of lagarosiphon,'' Mr Naik said.

''The main aim of this control programme, and others, is to reduce the risk of transmitting lagarosiphon to other lakes, as well as ensuring high-use areas are kept clear for recreational users.''

Originally used by the aquarium trade, lagarosiphon was first noticed in the Rotorua lakes in the 1950s. The unwanted organism, which is capable of choking waterways, smothering native aquatic plant communities and establishing quickly if untreated, has gradually appeared in many lakes.

Hornwort is a submerged freshwater weed that rapidly invades water of varying clarity, temperature, light and nutrient level. Its dense growth crowds out native species and impedes irrigation, drainage and other water uses.