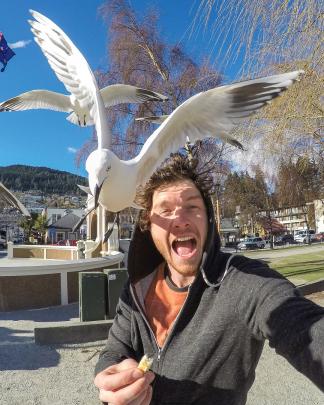 Allan Dixon is parlaying a childhood spent taking videos and photos into a way of life.

The 30-year-old Irishman and Queenstown resident has built a big audience on social media since taking a selfie with a quokka — a cute marsupial — on Western Australia’s Rottnest Island 11 months ago.

Mr Dixon said that "hero shot" boosted his followers on Instagram to more than 300,000 and opened his eyes to the possibility of making a living from his skills.

It was the culmination of more than two years of taking self-portraits with animals encountered in Australia.

But it was mainly the product of time spent as a teenager filming himself and a mate skateboarding and uploading the footage to YouTube.

His love for visual media was put on hold when he went to university and became distracted by engineering "and women, of course".

After graduation he found himself sitting in front of a computer all day and thought: "There’s more to life than this".

"It just didn’t feel like me so I went back into the mediasphere and started taking more photos."

A big break came when he entered and won Tourism Australia’s ‘Best Job in the World’ competition, beating 250,000 other applicants and getting a six-month, all-expenses-paid trip to Australia.

But last year’s quokka shot and the many animal selfies he had taken since had thrust his work into the limelight, he said.

"It was the turning point when I realised you could get paid for the media that you create."

He now spent his days maintaining his presence on Instagram and pushing his message that people "need to reconnect with nature and wildlife".

He is also leveraging his legion of followers to pursue work on marketing campaigns for tourism bodies and activity operators, and is in demand as a public speaker.

His next appearance is at the Travel Showcase event for social media entrepreneurs in Christchurch on October 30.

Mr Dixon said he had spent the past seven months in Queenstown because he loved "adrenaline, adventure and mountains", but plans to spend the summer in Auckland, to be closer to the movers and shakers in the marketing industry.