Cashing up and moving on from Arrowtown 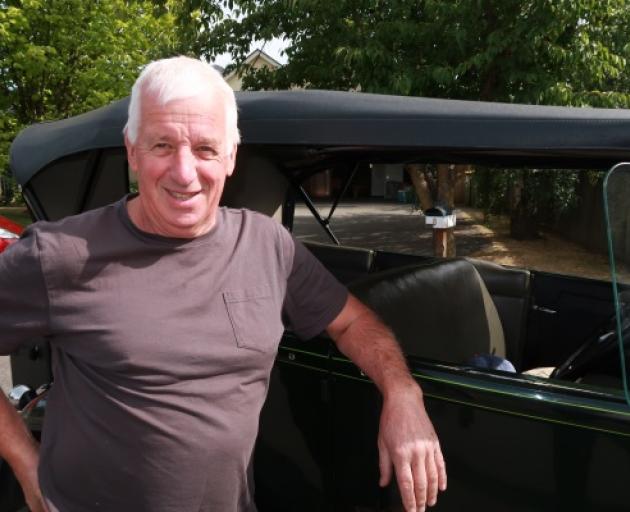 Nigel Douglas has owned this 1930 Ford Model A since he was 16. Photo: Mountain Scene
Getting involved in the community was second nature for Arrowtowners Alison and Nigel Douglas. Nigel goes over their local highlights with Philip Chandler, explains why they’ve left for Geraldine, and has a shot at the council.

If a community’s held together by volunteers, you could say Arrowtown this week lost some of its glue.

Twenty-four years after settling in Arrowtown and throwing themselves into the community, Nigel and Alison Douglas left on Monday to forge a new life in the South Canterbury town of Geraldine.

Whether it was Alison’s long stint as a local Montessori teacher, both of them performing for the Arrowtown Entertainers or Nigel dressing as an old-time policeman on horseback during autumn festivals, the couple certainly made their mark.

After 17 years managing a Northern Southland farm, Nigel, who hails from Invercargill, says they decided to move to Arrowtown in 1996 due to a farming downturn.

They’d bought a section in Tipperary Place for $80,000 and built a house they could still see the golf course from, before they got crowded out.

For seven years they owned a pottery shop, The Muddy Tree Company, “then all the colourful stuff we sold that was locally made was suddenly in vogue at The Warehouse for about one-tenth of the price”.

Alison initially travelled around Southland, working for a rural education programme, before landing her preschool teaching role with Montessori.

In 1999, Nigel became Queenstown Airport’s first full-time quarantine officer, and during 12 years’ service travelled as far as Japan, to pre-inspect cars heading to New Zealand, and flew to Australia to jump on cruise ships heading here.

The couple also got active in the community.

Nigel recalls they performed 10 to 12 shows in a row for the Arrowtown Entertainers, playing parts written for them by Dave Dustin and Ray Currie.

“I cross-dressed all the time – you were totally out of your comfort zone.

“I was Dame Wishy Washy in Aladdin and in a take-off of [former radio and TV quiz show] It’s In The Bag I was [host Selwyn Toogood’s assistant] Tineke.”

He chaired the autumn festival organising committee for two years, and in the parade, often dressed up in an ornate 1880s policeman’s uniform, which last week he donated to the museum.

He was among many locals who dressed in period costume at festival time and for events like History Alive and the town’s 150th anniversary.

Nigel says it’s “very sad” those days have passed, which he partly blames on apathy.

But he’s also concerned the council’s made it hard for community event organisers these days with compliance requirements which recently even killed off the annual Post Office fundraising market.

The Library Green’s designated for community purposes, so why’s it so hard for groups to use it, he asks.

He fondly recalls when he and others would haul a big trailer up from Bush Creek for use as a platform for main-street festival entertainment – “I don’t know if we had to have a resource consent for it, we just did it”.

Of course, Arrowtown’s also going to miss Nigel’s immaculately-maintained Model A, which he bought, as a school boy, for just 60 pounds from a farm, funnily enough near Arrowtown.

Nigel says his pride and joy’s “a wolf in sheep’s clothing ‘cos it’s got a state-of-the-art overhead valve conversion in it”.

“You’ve got to keep it up to date – it’s not much use having a dray on a modern road.”

He says they’re initially living in Geraldine with Alison’s mum, who’s 96, before moving to a house they’re having built there.

As to why they’ve left, Nigel, who’s 71, says it’s partly because the area’s not what it was – especially the growth in traffic over the past five years – but it’s mainly because of the capital gain they’ve got by selling up.

“We can realise some of our asset while we’re up and doing.

“While I’m still physically and, hopefully, a bit mentally capable, we can do something else.”

But Arrowtown, he adds, “has been very kind to us”.