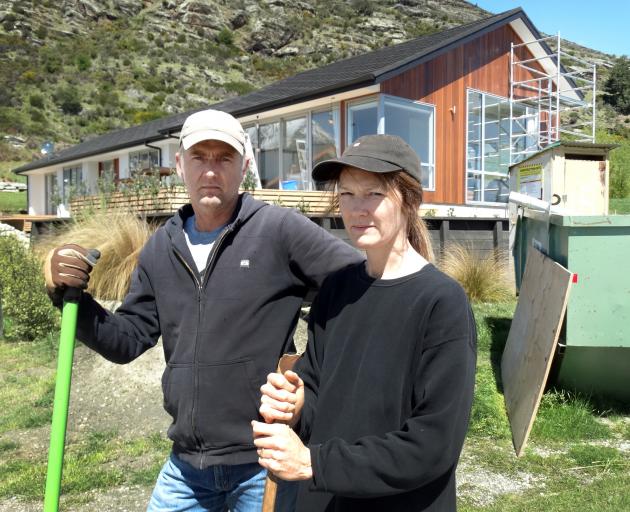 Disgruntled Queenstown home owners Tony and Rachel Windner outside their Kelvin Heights property, left unfinished when Fowler Homes Southern Lakes went into liquidation in March. Photo: Tracey Roxburgh
A Queenstown couple plan to lobby for a law change after they say they were deserted when a Fowler Homes franchisee went into liquidation in March.

The Windners moved in to their new Kelvin Heights home at the end of August, 18 months after they were told by former Fowler Homes Southern Lakes owner-operator John Mansfield it would be completed, and after paying $290,000 more than the agreed price.

That included $200,000 to finish the build, more than $60,000 to rent back the property they had sold to help fund the new home, based on timelines Mr Mansfield gave them, and legal fees.

They want to talk to Clutha-Southland MP Hamish Walker about the situation, because regulations had offered them no protection.

‘‘It can ruin people financially.

‘‘In housing there’s this franchise situation where, at the end of the day, the franchisee goes bust and you’ve got nothing.’’

They hope Mr Walker may be able to introduce a private member’s Bill and push for a legislation change so, in future, others may be spared the time, cost and stress they had endured.

The couple signed a contract with Mr Mansfield in July, 2017. The house was to have been finished by February 2018 but by then only the floor slab had been laid, they said.

It was winter before the roof went on, by which point their Shotover Country house had been sold and they were renting it back, at $780 a week.

About August last year, they heard Mr Mansfield might be in financial difficulty, so they emailed Fowler Homes Ltd managing director Tony Hill, but said they were disappointed with the response.

Over seven months they sent a total of 12 emails to Mr Hill, but help was not forthcoming.

In a statement yesterday, Fowler general manager Kerwin O’Malley said: ‘‘At the time of liquidation, John Mansfield ... reassigned the jobs himself independently.

‘‘Once in liquidation, all property including the job information and files went to [liquidators] BDO and Fowler Homes NZ did not have access to this.’’

The Commerce Commission confirmed the Windners’ complaint was received in June and was assessed, but it decided to take ‘‘no further action at this time’’.

‘‘The outcomes of our assessment process are not final and we may revisit any complaint at a later stage, should we wish to reconsider the issues it presents.’’