Alongside the Shotover Jet prototype, which runs on rechargeable batteries instead of fossil fuels, the iwi unveiled an 88-point climate change and environmental action plan yesterday, which addressed greenhouse gas emissions, marae and whanau resilience, water and ecosystem protection, renewable energy and education.

Ngai Tahu will invest $27 million over the next three years on the Te Kounga Paparangi plan, part of which will result in the electrification of 50% of its tourism jet-boat fleet by 2030.

The aim is to make all of its tourism operations carbon-neutral by 2050.

Ngai Tahu kaiwhakahaere Lisa Tumahai said following the iwi’s 2018 climate change strategy, the "rubber needed to hit the road" in demonstrating how it will contribute to a low emissions economy in New Zealand.

"I’m really thrilled because this is us tangibly taking climate action," she said. 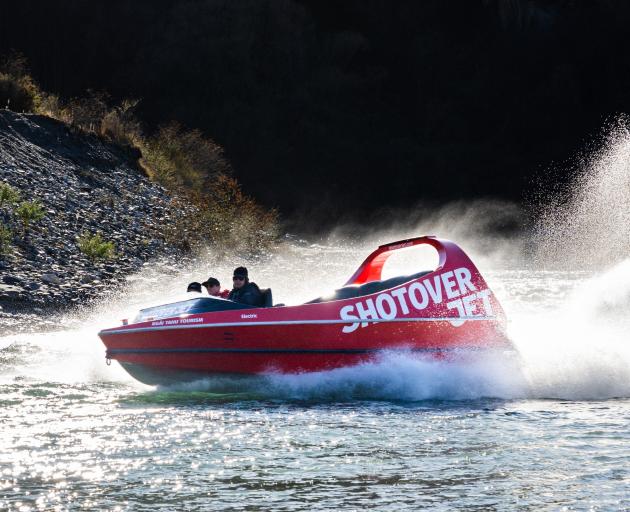 Skipper Nick Simpson takes to the river in the new fully electric Shotover Jet boat. PHOTO: SUPPLIED
"It’s tangible action, tangible change ... We can measure our emission reductions, we can evidence what we’re doing and that’s contributing to the iwi’s aspirations for climate action."

Te Kounga Paparangi has set targets to be met by 2030-35 which include a 17% methane reduction from farm animals, reducing water and synthetic fertiliser use at Ngai Tahu Farming sites, exercising active sovereignty over freshwater, instituting ecosystem enhancement plans and introducing 100% biodegradable/recyclable packaging on all its consumer products.

"To our knowledge, it’s the first commercial jet-boat operation to turn into electric ... so it’s a significant step for us to say this can be done," she said.

The prototype has faced battery storage challenges — it currently takes 15 hours to charge in exchange for two trips on the water — and commercialisation is still several years away.