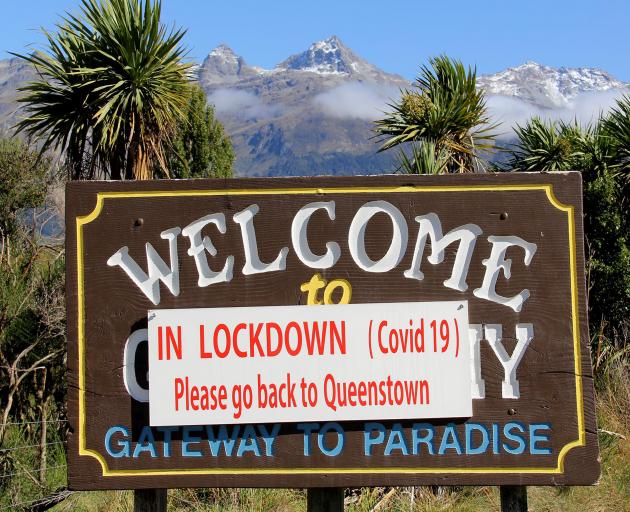 Glenorchy residents are clear where they stand on visitors during the Covid-19 lockdown. PHOTO: SUPPLIED
An anonymous Glenorchy resident has made it clear visitors are not welcome in their town for the foreseeable future.

Just before the lockdown began last Thursday, a sign was placed at the town’s entrance by an unknown person to alert anyone who is not a resident, or essential worker, to turn around and go back to Queenstown.

Glenorchy resident and Queenstown Lakes district councillor Niki Gladding said there were still a few camper vans in the area before the lockdown.

“I think there was concern about camper vans around the place ... they were turning up at Kinloch and saying ‘We didn’t know there was a lockdown happening’,” Ms Gladding said.

Although the placing of the sign was not a collective community initiative, Ms Gladding said Glenorchy residents were certainly happy with it being there — and it was not just aimed at tourists.

“The community just wanted to make sure, given all the tourists that were around and that are still driving round the country, that Glenorchy is not the place to be, and that everybody needs to stay put, stay home and save lives.”

However, she was confident there had not been any non-locals or tourists around since the lockdown began a week ago.

“Hopefully, all that’s stopped but who knows ... there was a report on television the other night that said that was still going on, [police commissioner] Mike Bush made the point.”

She said if the town was to have an outbreak it would be completely under-resourced to cope with it.

“Hopefully, the sign sends the message that we don’t need people driving into glenorchy.”