By Guy Williams
0 Comments
More snow would be more than welcome, but visitor numbers at Queenstown's ski areas are holding their own, NZSki chief executive Paul Anderson says.

While patronage at Coronet Peak was down on last year's exceptional winter, it had been "extremely busy" at The Remarkables, with some record days.

That meant the numbers for the season so far were about on par with the company's usual expectations, Mr Anderson said.

At Coronet Peak, man-made snow had got it through the Australian and New Zealand school holiday period, which ends on Sunday. 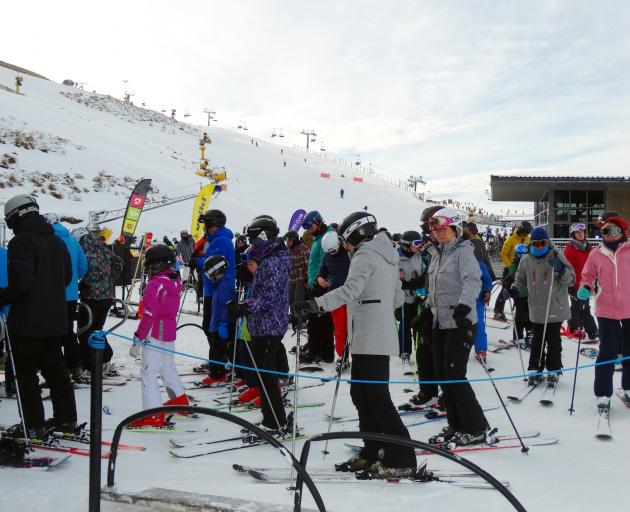 Skiers and snowboarders wait to board a chairlift at Coronet Peak yesterday. PHOTO: GUY WILLIAMS
"Snowmaking has been our saviour this year.

"We've got all the main trails covered, and when we get these nice cold nights, we get this crisp, cold snow being made.

"The product is still excellent, even though we've only had about 25cm of natural snow to date."

An exceptionally dry June had been a "double-edged sword" for the mountain.

"With dryness we don't get precipitation, but we do get good snowmaking conditions.

"We'd love to have a couple of great big storms come through to cover all the off-piste."

The Remarkables has been less reliant on snowmaking, with 80cm of natural snow to date.

With the busy school holiday period about to end, some natural snow would help attract independent travellers as well as locals, he said.

"It is totally about perceptions, and when you get the dump of snow and the shots of people spraying powder around, that brings the punters out."

NZSki was getting "mixed signals" from its key skier market across the Tasman. The Australian economy was a "bit soft".

Its skifields had received good early snow, seen it washed away by rain, then received another good fall.

"Our wholesale bookings are really strong ... but possibly the free independent travellers are down."