New airport a mountain to climb

An aerial photo of Wellington Airport in March. PHOTO: SHANE SAHEEM
The chairman of Wellington International Airport Tim Brown has thrown a bucket of cold water over the idea of a new Otago airport to replace Queenstown Airport. Even if a suitable site could be found, he believes it would take an Act of Parliament to get it started, and there are better solutions to explore. Mark Price reports.

Tim Brown lives in Wellington but has two qualifications relevant to a discussion on airports in Otago.

He is part of the management team of Infratil, the NZX-listed infrastructure company which owns two-thirds of Wellington International Airport.

And he is chairman of the airport's board, currently bogged down in a planning battle to extend its runway.

Mr Brown said this week it sometimes feels like his airport is no further ahead with its plans now than when it started seven years ago.

He first approached the Otago Daily Times last October, after Air New Zealand boss Christopher Luxon said it was time to have "a bigger, bolder, braver conversation about creating a new Central Otago airport that could support Queenstown or Wanaka but from a different location from where those airports exist today".

Mr Brown suggested then a possible way forward was for local government to partner with Infratil - using its expertise and capital - to put forward a proposal to Government.

"I'm not in any way suggesting that Central Otago needs another airport or that one could be viable, but I note that were the relevant council to want to progress this, it isn't that difficult and needn't cost ratepayers."

But that, he explained this week, presupposed there was the political will at local and national level.

"It would have to involve pretty much everyone who has skin in the game" and they would need to be "very, very positively engaged".

He gave as an example of how hard big infrastructure projects were to get off the ground Wellington Airport's attempt to extend its runway, to allow for bigger aircraft.

The plan has Wellington City Council support and "passive" support from Government but "six years, and we still have another two to three years to run before we are going to have consent to actually build anything.

"New Zealand has got a regulatory regime which makes it very easy for people who are opposed to things to stop things happening."

And, as an example of a project that did not happen, he pointed to the New Zealand Transport Agency which, despite having the power of the Public Works Act, failed to get court approval for its proposed bypass around the Basin Reserve.

"So, if you were looking to build a new airport in Central Otago, you would be starting out by saying `I'm going to have to have at least 10 years and probably at least $20 million in the bank to take me through this process'."

Asked if he might be touting for business for Infratil, Mr Brown said "probably quite the opposite really".

"If you wanted to do it, if local government and central government got together and said we'd like to close Queenstown, we'd like to build a new airport, then by all means I'm sure we would be delighted to be partners in that coalition.

"But, in terms of the plausibility of that happening; I would say it's extremely low.

"If you came to me today and said `would you put your own money into it or Infratil's money into a project like that', I would say `probably not', because I would say the probability of actually coming out with something that was viable is very low.

"Building a new substantial international airport would be a mammoth consenting process. That would be a huge problem."

However, the Government did have the ability to use empowering legislation to make projects happen.

"Government can do anything.

"But there has to be a massive political will on both sides of the house to actually make it happen.

"Would National and Labour get together and pass legislation to sort of cut through the RMA on building a new airport?

The Queenstown Airport Corporation is projecting demand to rise from just over 2million passenger movements to just over 7million by 2045, and is looking to take some of the load off by developing its Wanaka Airport.

"But I think closing one airport in Queenstown to open another one up the road ... doesn't strike me as the smart way of doing it."

He believed the numbers would likely be the opposite way round.

The 355m extension to Wellington's runway was expected to cost about $1million per metre, and a new terminal being built was costing about $500million.

Mr Brown said it would cost a total of about $1billion to take Wellington Airport from 6.5million passenger movements to 8million.

From a Dunedin perspective, he said, "it is just staring you in the face" that the debate should be around improving connectivity between centres.

"Basically, looking at the existing facilities and saying how can we make these more popular, more effective, rather than just as they have done in Auckland, putting more and more into that bottleneck."

He suggested an approach to the Government's provincial growth fund to develop regional infrastructure might be the way forward. 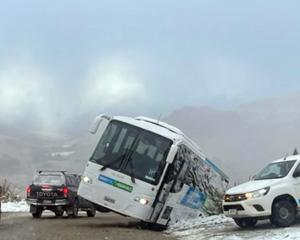 Mark, thank you for finally getting someone with credence to comment on this saga. I hope it will now stop people trying to “find a suitable site in Central”.
An airport is more than a runway. They become “cities within small rural settlements”. For eg. CHC employs over 6,000. Sounds strange, but ZQN employs 15 full time firefighters, yet surrounding communities are run solely by volunteer brigades. The point I make, is airports not only take a huge footprint, they take over a community. ZQN has done that.
So where to? WKA will cost ? $400 mil and only a stop gap measure but will destroy Wanaka.
DUD is too far away from Central and the roads are not good.
And then there is IVC, all set to go. One of the longest runways in NZ, clear approaches, a city with the infrastructure and no cost. The tourists will soon adapt to a short propeller flight or 2 hour bus trip. After all, they are queuing up to come.
However Tim Brown, as far as WLG goes, a full RESA is needed there so thank god "NZ has a regulatory regime which makes it very easy for people who are opposed to things to stop things happening."

Wellington and Q/town; two lousy short runways, with infrastructure around them, and will remain in use until disaster strikes....