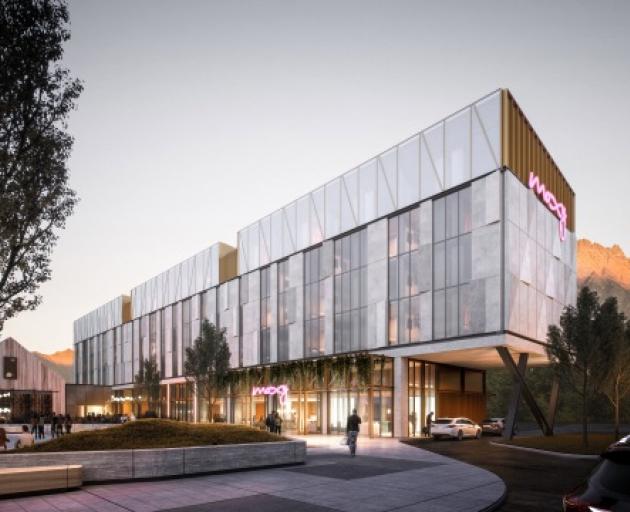 This newly-announced Moxy Queenstown hotel promises to deliver an experience rather than simply a room. Photo: Supplied
A fun, funky, next-Gen hotel has been announced for Queenstown’s newest shopping centre.

According to its website, “Moxy Hotels serves as a playground that attracts Fun Hunter travellers and is designed to give guests everything that want and nothing they don’t at an affordable price”.

“The signing of Moxy Queenstown and the recent growth of the Moxy Hotels brand in Australia and NZ is reflective of what travellers want today – an accommodation experience, rather than simply a hotel room,” Marriott’s Australasia/Pacific hotel development boss Richard Crawford says.

“Experience is driving travel both in NZ and globally, and the idea of a hotel delivering a lifestyle, an experience, a story, is increasingly sought after by visitors.”

It’s got six levels, along with a possible basement carpark.

Queenstown Central spokesman Simon Holloway confirms it’s part of the complex’s next stage, across the road from tenants like Love Chicken and The Coffee Club, and around the corner from Kmart.

Holloway says a hotel’s always been envisaged as part of a mixed-use development which also includes offices and residential units – seen in the Remarkables Residences complex on part of Queenstown Central’s original landholding.

Allowing for the consent process – including a variation to an existing hotel consent – and completing working drawings, he expects construction to start in about 12 months.

And, depending on the construction method, the build could then take 18 months.

Holloway says Queenstown Central Ltd’s excited to partner with Marriott to bring the Moxy brand to the resort.

“The Moxy brand is a natural fit for us, bringing a fresh and innovative approach to the hotel experience that is reflective of our own vision and values.”

It’s understood Marriott also wanted to operate a hotel opposite Queenstown’s Hilton, but the developer pulled out.