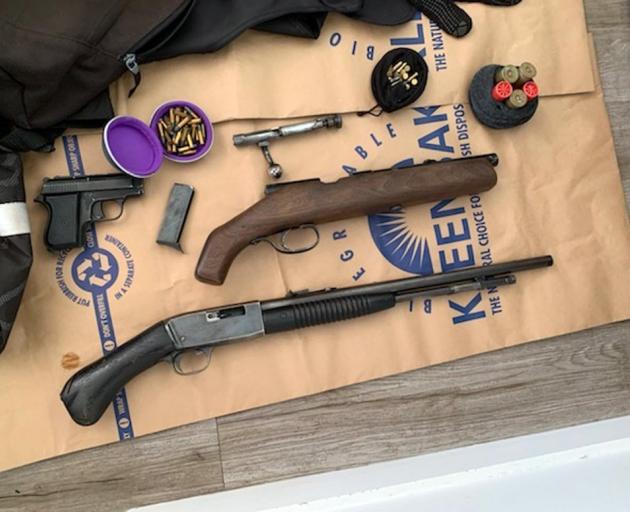 Police recovered weapons and drugs in two linked raids in Queenstown and Christchurch. PHOTO: SUPPLIED
Police carried out a drugs bust in Queenstown yesterday morning, arresting a man and a woman.

A spokesman confirmed officers recovered methamphetamine and related equipment as well as seizing a car from an address on Fernhill Rd.

A third person was arrested in Christchurch as part of a linked operation.

The raid in Christchurch resulted in officers recovering 200g of methamphetamine, four firearms — including a pistol — and more than $30,000 in cash, the police spokesman said.

"It is a pretty nasty drug and causes a lot of harm in families and if we can stop that, especially with the extra stress that is out there for everyone at the moment, we will continue to do that."

He said the man (53) arrested in Queenstown shortly after 9.30am appeared in court yesterday and was remanded.

The woman (31) also appeared in the Queenstown District Court and was released on bail.

A police media spokesman said they both faced numerous charges, "mostly relating to the supply of methamphetamine".

Det Snr Sgt Inglis said officers had worn protective clothing in case they came into contact with somebody who had Covid-19.

"We know that people involved in the drug industry travel regularly and meet with people we were aware may have been involved or may have some exposure to Covid-19.

"So we had to take extra precautions."

He said such measures would not stop police from doing their jobs.

"Those who think that this is a good time to be dealing drugs and causing more harm — we will be coming after them.’’

About 10 officers were involved in the Queenstown raid, with one officer initially armed, the detective said.

Det Snr Sgt Inglis said yesterday’s raid should make a significant impact on the supply of methamphetamine into the Queenstown area, especially during the current lockdown.

In a separate operation last weekend, Det Snr Sgt Inglis said a man had been arrested and appeared in court charged with supply of methamphetamine.

He said this demonstrated the police’s determination to identify and prosecute those spreading harm through supply of illicit drugs.