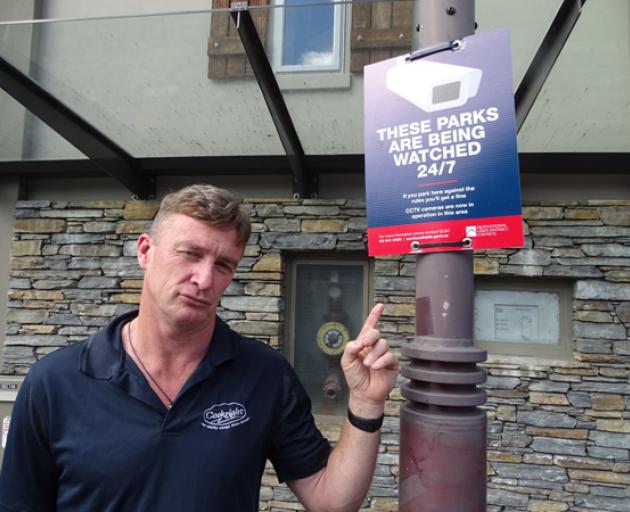 Business owners are up in arms over a parking clampdown in the CBD, calling it a “blatant cash grab” with one owner booked nine times in two weeks.

For years, shop owners at the western end of Shotover Street have been using taxi stands to quickly drop deliveries to avoid lugging heavy bags and boxes across town.

They say they’ve got no other option because there’s not enough service bays close enough to drop off supplies.

But CCTV cameras were installed at that end of town about three months ago.

Since the start of August, fines for pulling up in a taxi stand, “for a matter of seconds”, have been hitting mailboxes thick and fast.

Jin Hong Parker, owner of I love KIMCHI, was slapped with nine $40 fines, totalling $360, in a two-week period for pulling up in a taxi stand.

Parker says sometimes it was no longer than “10 seconds” when his wife would drop him to work.

Tiger Tattoo Queenstown owner Scott Mcfarlane got fined four times in a week, costing $40 a pop. Two tickets arrived in the same envelope, issued within one minute of each other.

“I was pulling into one park to wait for another, so I could run in to check something in my store,” Mcfarlane says.

His staff have also been stung, and he’s noticed many drivers using the taxi bays to drop people off to Base Backpackers.

“I see people pulling in and out every day; elderly who are dropping off a backpacker they’ve kindly given a lift.”

Store owners say they weren’t told about the CCTV cameras.

“I’ve emailed them [council] and all they emailed back was ‘You were witnessed by CCTV camera parked, stopped or stood on these spots’,” Mcfarlane says.

Since CCTV cameras were first installed in mid-2018, almost 10,000 parking fines have been issued after being caught by them.

“We have become aware that signage from the taxi stand and outside Base Backpackers has been removed, and will need to be replaced,” Barlow says.

CookRight Kitchen Services owner Scott McDonald has taken a swipe at council for turning loading zones in the CBD into taxi stands between 6pm and 6am.

His staff drive from business to business in a van, changing deep fryer oil and removing waste.

They operate in the early hours of the morning, so cafes and restaurants can be open for the breakfast rush.

Without sufficient parking and no loading bays before 6am, his workers are forced to park “miles away” and carry 20-litre drums of hot oil – “It’s a workplace health and safety issue”.

“Why can’t they just leave the loading zones alone and allow them to be used for service vehicles that need them before 6am?”

He’s been slapped with 12 tickets, despite being parked for no longer than 10 minutes.

“It’s a complete oversight by the council, they’ve dropped the ball on it and they need to sort it.”

He goes further to say it’s a “blatant cash grab” that’s hurting the “lifeblood” of Queenstown, and it’s slowing down trade.

A draft strategy aimed at making parking more fair will be released in the next few months.