Passengers first to enjoy Flyer in more than 8 years 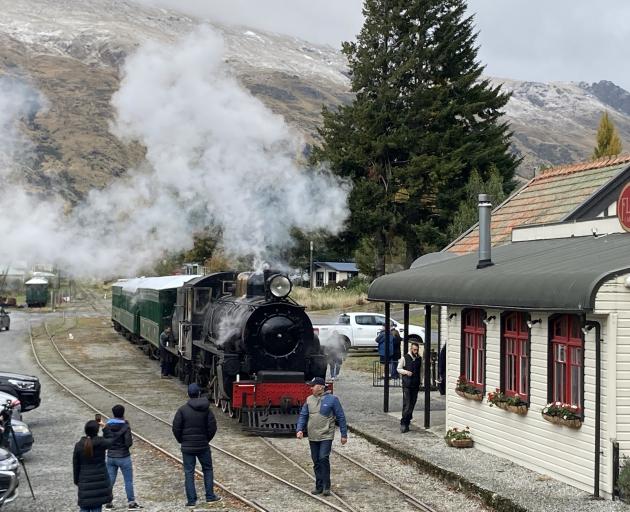 About 180 people boarded the steam train at Kingston just before 10am and travelled to Fairlight where they celebrated with a glass of bubbles. Photo: Stephen Jaquiery
About 180 people made history this morning, becoming the first passengers on board the Kingston Flyer in more than eight years.

The group, part of the Great Southern Train Tour, boarded the steam train at Kingston just before 10am and travelled to Fairlight where they celebrated with a glass of bubbles.

The Flyer, named for a passenger train that ran from 1878 until 1957, operated off and on as a heritage train attraction between 2003 and 2013, travelling between Kingston and Fairlight.

In 2011, after a three-year hiatus, it was revived by the late David Bryce, who spent $1.3million restoring the engines and carriages before relaunching the operation.

But it ran for only two summers, and was mothballed until a group of Auckland-based investors bought the train and associated land and buildings in 2017.

Today it will carry 360 passengers during a special leg of the inaugural Great Southern Train Tour.

Pounamu Tourism Group managing director Paul Jackson said the group had been working closely with the Flyer’s engineer, Neville Simpson, to put together the excursion for the tour parties.

Mr Simpson had put in a "huge amount" of work on the rolling stock, locomotives, and carriages, as well as clearing the tracks and replacing sleepers to enable it to occur, he said.

"[The tour] is really going to be a trip of a lifetime, not just for rail fans, but everyone on board, and one of the highlights [of the tour] will no doubt be the Kingston Flyer."

Along with the Flyer, the tour groups would travel on trains hauled by a 100-year-old steam locomotive and two 1950s heritage locomotives during the two-week tours around the South Island.

Two tour parties set off in the past few days, going in opposite directions.

Mr Jackson said one group of 180 started in Blenheim and would travel by train to Invercargill before being transported by luxury coach to Te Anau for two nights.

On the way to Queenstown they would take a ride on the Flyer, spend two nights in the resort, travel by coach to Franz Josef, and then connect with the TranzAlpine train service and finish in Christchurch.

The other group started in Christchurch and was doing the reverse trip.

He said the success of the tour had already inspired Pounamu Tourism to look at running more heritage tours to help New Zealand’s economic recovery.

"One only needs to look at the UK to see how many millions and millions of pounds is generated from heritage rail.

"What we’ve realised ... is there are so many other heritage items that are of interest when you get to each town.

"Things like the Earnslaw and Walter Peak and Kingston Flyer and the Passchendaele locomotive and the transport museum — New Zealand has a phenomenal selection of heritage attractions and people do just really enjoy that."

Mr Jackson estimated the tour was worth more than $2million to the South Island economy and it was also supporting heritage rail and "employing a lot of people in the process".

NZ is small enough and remote enough to put much more effort into niche products, including tourism, instead of the bulk discount-store approach that had been cluttering the country with low-return masses in pre-covid times. Pre-selling attractions to tour operators at bulk discount for them to sell at full price gave the impression that local operators had big numbers of customers. Tour operators got the cream.
High value niche products should be our way forward, whether tourism or timber. More skilled jobs for NZers, better return on our labour and materials, high satisfaction for fewer but more discerning customers who are prepared to pay for the kind of quality you can't get in Walmart or cattle-class.
NZers have discovered that NZ is a great place to travel in when it is not crammed with once-over-lightly overseas tourists. If niche travellers with specific interests have the opportunity to meet NZers who share their passion they and their families and friends will get amazing word of mouth recommendations of immeasurable benefit to us.
We have the opportunity to re-shape tourism. Let's take it now.