Plan B for 'disappointed' developer 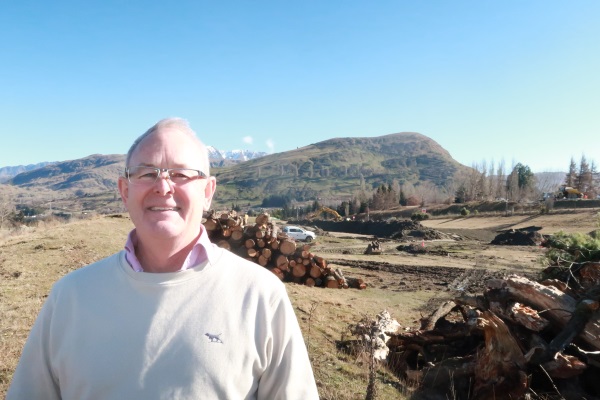 Developer Wayne Foley on the site of the Koko Ridge subdivision, currently being developed. Photo: Mountain Scene
A developer whose company is selling sections at Queenstown’s Ladies Mile for about $1.2 million-plus makes it clear it’s their "Plan B".

After heated opposition from nearby residents concerned it would create further Ladies Mile traffic congestion, the council punted the proposal.

Lead partner, Arrowtowner Wayne Foley, says they had been encouraged by council staff to plan "an intensified subdivision".

"Our proposal did include a slip lane which would have facilitated a real improvement in traffic flows rather than relying on the Stalker Rd roundabout."

Ten percent of the sites would also have gone to the local housing trust for more affordable housing.

"I’m really disappointed we’re not able to provide appropriately-sized lots that would allow for people in our community to purchase affordable sections on this side of the airport," Foley says.

His company then applied for, and was granted, what the district plan allowed on its 10-hectare block — 26 lots of at least 2000 square metres each.

"What we’ve ended up with is a subdivision where the selling prices for these sections will range from around $1.2m upwards to $2m."

Work started a month ago on forming the renamed Koko Ridge subdivision, and should be completed by next March/April.

Foley expects marketing will start about October, "when people can safely enter the property".

"We believe it will appeal to those looking for a greater land area than higher density, but also those who don’t require a two-, three- or four-acre property where the maintenance is effectively a life sentence."

The developers will also build a bund by the Ladies Mile high way to screen the subdivision and reduce traffic noise.

Foley says they haven’t analysed the traffic volume Koko Ridge will create, "but we don’t anticipate we’re going to add anything of a material nature to what’s already happening".

One of the 26 lots has a house on it that’s being refurbished and will also be put on the market.

"When you view it from the highway, you have no appreciation of the amount of land that’s in there, and the superb vista the property has."

Some sections, he notes, will also back on to an existing pond.

As for the name, that refers to the native tui or parson bird.

"We’ve got a number of cabbage trees and flaxes we would expect tui to frequent," Foley says.

I must have missed the law change that says developers have to make 50% + profit on each section they sell. This land could be sold a lot cheaper than 1 - 2 million per block, it just wouldn't make the bumper profits this bloke wants.

And we wonder why so many people can't afford a house, just good old plain greed.

Das 'koko'. Expectation is not enough. Will it frequent?

It's all about Jimbo and council not wanting to let the "Riff-Raff" aka "Non-Multimillionaires" into the area by keeping sections so expensive ...

It is pointless undertaking a subdivision for lifestyle blocks which require a ride on mower.They need to allow much smaller sections at an affordable price & intense development.People have to live somewhere & making land too expensive does not solve the problem,as it limits buyers to the elite.