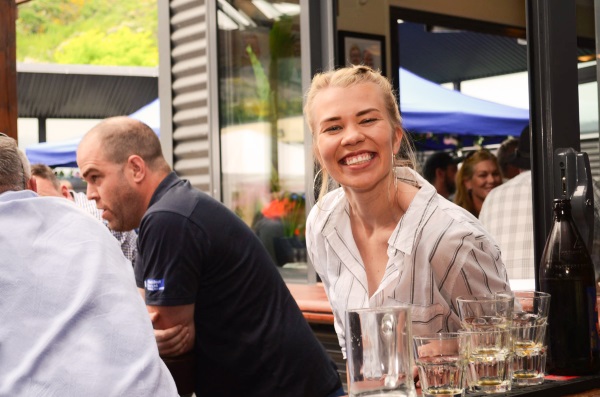 Frankton Arm Tavern barmaid Essi Lehtonen, who is recovering from a sudden stroke. Photo: Supplied
An overwhelming community response is helping to lift the spirits of a popular Frankton bartender left blind in one eye by a stroke.

Essi Lehtonen’s been part of the Frankton Arm Tavern team for three years, having moved to Queenstown two years prior.

Ever popular and keen to help as many people as possible, Lehtonen, from Finland, is now on the receiving end of assistance.

Six weeks ago, the 25-year-old was hit with a life-altering stroke caused by a previously undetected heart condition that requires surgery.

She's unable to work or claim ACC, and too sick to fly home – if that were even possible – and now her colleagues are rallying around her to raise vital funds.

The Givaelittle page has surpassed $10,000 and, Fenton says, to date in the pub, through the raffle, the silent auction and donations, “we’ve got another $12,000”.

“I couldn’t believe it, every prize somebody won they put back in to be raffled again.”

“Just after Covid, it’s so nice to see when people don’t have a lot themselves at the moment, anything they could give, they did.”

The date for Lehtonen’s operation’s still unknown, but Fenton says the community outpouring’s “given her such a lift”.

“She is the epitome of a lovely person, inside and out, there isn’t a bad bone in her.”

The money will go towards medical costs, cost of living and flying Lehtonen’s mum out when the borders reopen.