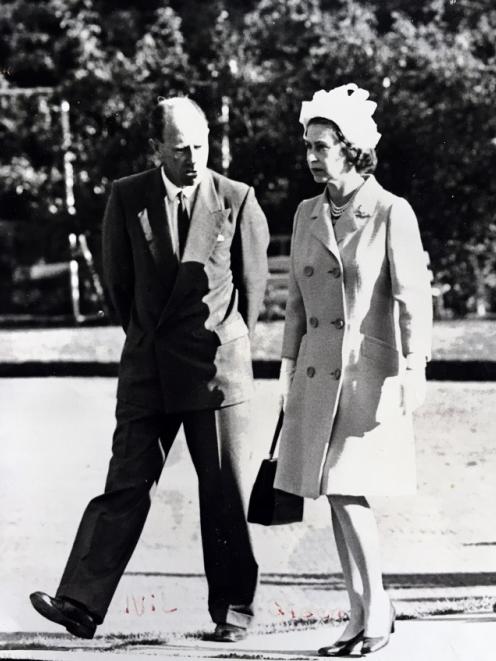 Leefe took the head gardener’s job, aged only 24, after seeing it advertised while holidaying here in 1953.

He’d trained with the Auckland council’s parks and reserves department for the previous eight years.

“He remembered there were 841 people living in Queenstown when he arrived,” daughter Barbara Wilkes says.

Despite some opposition, Leefe instigated a tree-thinning programme so the Gardens’ specimen trees could become more visible.

His pride and joy was the 25-bed formal rose garden, formed in ’67, which he developed after visiting rose gardens around the country.

“My sister can remember him having it all laid out on a table,” Wilkes says.

The beds were filled with sheep and chicken manure from Frankton farms, and the roses, which he never sprayed, were hailed by experts for their vigour, cleanliness and general health.

Leefe stood on the bucket of a front-end loader which shifted a large commemorative elm tree from the front of the Gardens to preside over the rose garden.

During the 1970 royal tour, he was introduced to the Queen by then-mayor Warren Cooper.

Cooper recalls: “She said, ‘Mr Leefe, what a delightful name for a gardener. My gardener is Mr Gumnut’.

Cooper says Leefe once borrowed his long ladder, which they both climbed, to get to the top of a ponderosa tree which was dying.

After lopping it, “he produced a Brownie Six-20 camera and with one foot on the branch and the other on the cut part, after I’d painted it, he took shots”.

In 1986, after 33 years’ service, Leefe retired early, at 58, mainly because he feared the then-Lands & Survey Department – which then ran the now council-run Gardens – was about to undo all his good work. Already, it had reduced staff from six to two.

Physically fit, Leefe had been a keen deerstalker and he also became an avid golfer, scoring five holes-in-one.

His home near the Gardens was notable for length-of-the-house staked tomatoes which tourists used to photograph.

At Eichardt’s bar, where he enjoyed socialising, a cartoon by local artist Garrick Tremain hung on the wall.

He and his wife Elizabeth moved to Mosgiel in 2001 – she died five years later.