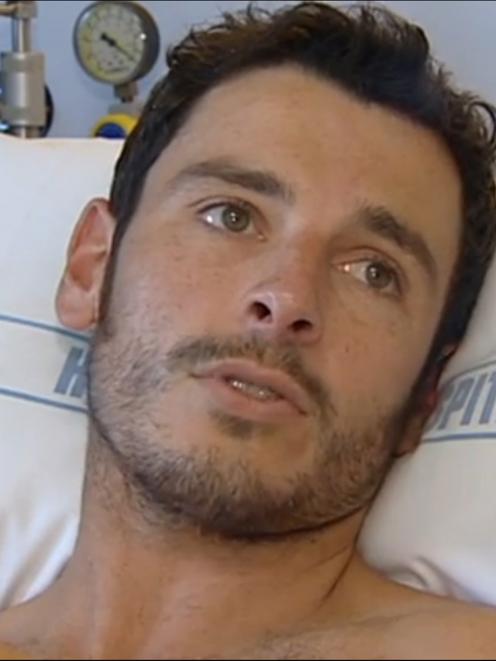 Darren Mills. Photo by One News.
Dramatic details of surfer Darren Mills' lucky escape from a shark attack emerged yesterday, as the Queenstown man began his recovery from serious injuries.

The 28-year-old was bitten three times while surfing at near Curio Bay, about 8.30pm on Friday.

Friends gathered at his hospital bed after he was flown by rescue helicopter to Southland Hospital. The shark attacked him at Porpoise Bay, in the Catlins area of eastern Southland, but he punched it away.

Mr Mills suffered three deep gashes between his thigh and his calf as the shark, possibly a seven-gilled or a great white, latched on to his leg while he sat on his surfboard 50m offshore.

Speaking on TV One last night, Mr Mills said he could not wait to get back into the water after his ''really lucky'' escape from a ''really scary'' encounter.

Mr Mills missed a wave and ''was pretty scared it was going to come back''.

But the shark stayed away, and Mr Mills made it back to shore safely.

Nick Stratford, the owner of Curio Bay Accommodation, said signs had been put up around the area advising of the attack.

Surfers were back out on the water by 8.30am on Saturday, he said.

''The shark attack hasn't kept people away. Right now there are about 10 surfers or boarders; even a swimmer out doing laps.''

While there had been some talk of fishing boats tying up in the bay and throwing guts overboard, which could be attracting sharks, some locals believed there could be a shortage of food for marine animals.

''There have been no sea lions on the beach this year ... normally we would have seals on the beach, too. Perhaps their feed has been affected. Presumably, they are short on fish.''

Mr Stratford has lived in the area for many years and had never seen a shark while surfing.

''We know there are sharks in the water, but we don't see them this close in. Just a freak accident, I suppose.''

A Southland Hospital duty manager said Mr Mills, who has lived in Queenstown for several years but is from the English town of Crawley, was in a satisfactory condition last night.

Mr Mills' surfboard had bite marks in it, which had been used to estimate the shark at 2m to 3m long.