Sleepout written off in morning blaze

By Miranda Cook
0 Comments
Burnt belongings are all that remain of a sleepout gutted by a blaze in Queenstown.

About a dozen firefighters arrived to find a ''fully involved'' wooden structure, situated at the back of a home in Suburb St, at 7.30am yesterday.

Some of the property's residents stood together on the street, watching as a thick plume of smoke billowed from their home. 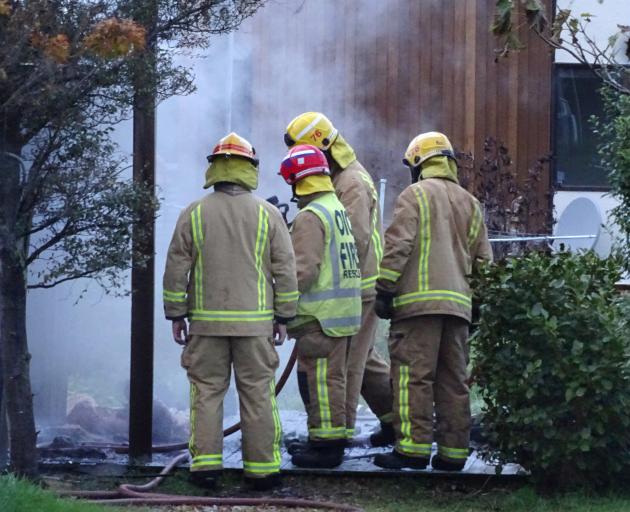 Fire crews responded quickly to a fire in a sleepout in Queenstown yesterday, but it could not be saved. Photos: Miranda Cook

One tenant, who was visibly upset and asked not to be named, said the 10 people living in the house were friends and had been there for a few years.

The person living in the sleepout was not home at the time, and everyone else was physically fine, she said.

Firefighters worked hard to quickly suppress the flames by 8.15am, but damage to the small sleepout means ''it will no longer be usable''.

Senior Station Officer Duncan Fisher said the sleepout was about 2m by 3m in size and was part of a ''group of three sleepouts'' at the property.

There was no damage to the other two sleepouts or the front part of the house, he said.

''It was lucky we got here quickly and got on to it fast.''

Firefighters spent yesterday sifting through charred rubble to find out what might have started the fire, and a specialist investigator was called to examine the site.

The blaze is the second structural fire in Queenstown this week.

A fire ''probably'' the result of a workplace accident that started at the workshop of car dealership Macaulay Motors, sparked a large-scale response from Fire and Emergency New Zealand.

A staff member was taken to Lakes District Hospital for moderate burns to his hands.