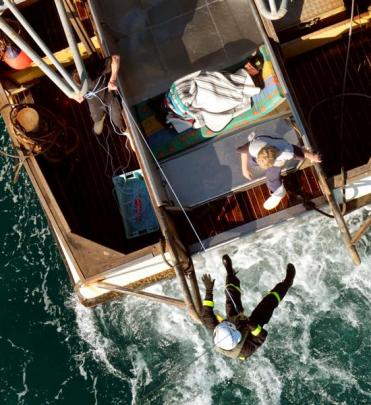 Paramedic Doug Flett is lowered from the Otago Regional Rescue Helicopter yesterday to recover an ill crewman from the fishing vessel Magane while it was more than 100km off the Dunedin coast. 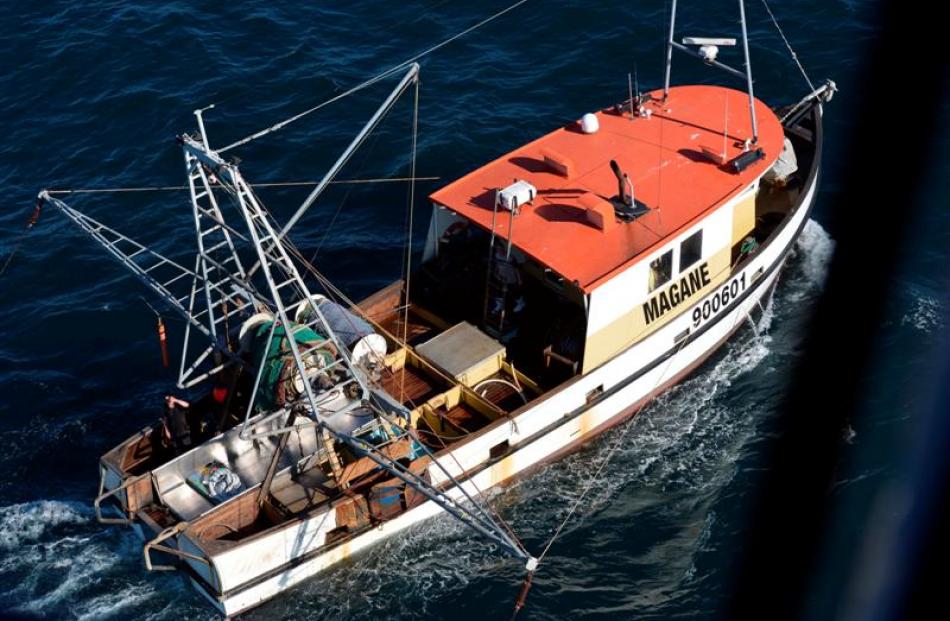 The offshore rescue of a sick fisherman yesterday capped off two ''full-on'' days of varied missions for the Otago Regional Rescue Helicopter.

Helicopters Otago owner Graeme Gale said the range of missions was the most diverse he could remember in such a short period of time.

''We do have busy days, and sometimes very busy days, but this [period] probably had more variety ... I don't think there's much else that we do, that we didn't do.''

The first of the ''full-on jobs'' came in at 1.30am on Wednesday, when the crew was called for an intensive care transfer from Dunstan Hospital, Mr Gale said.

That was followed, over the next 42 hours, by a vehicle accident at Waimate, a serious spinal injury at the Outram rodeo, a car over a bank at Waipori Falls, a search and rescue for an overdue hunter on the Old Man Range in Central Otago, the transfer from Dunedin Hospital to Christchurch Hospital of the man injured at the Outram rodeo and a neo-natal transfer from Southland Hospital to Dunedin Hospital.

Then, at 4.40pm yesterday, a call came in from the New Zealand Rescue Co-ordination Centre, via St John, to pick up a 29-year-old crewman with a serious medical condition, from the Timaru-based fishing vessel Magane, which was more than 100km off the coast of Dunedin.

The helicopter got back to Dunedin Hospital at 6.30pm. The winch recovery of the fisherman had been straightforward, Mr Gale said.

The capabilities of the rescue helicopter were a testament to the Otago Rescue Helicopter Trust and the financial support from the communities that ensured the helicopter had the required resources and training, ''to rescue patients from their predicament as quickly, safely and comfortably as we can to deliver the highest level of care'', he said.

''Today the crew can take a bow because they really stood up and performed.''