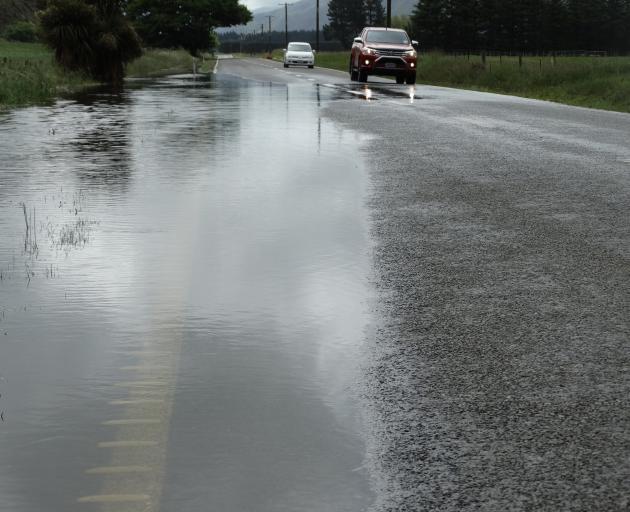 Several days of at times torrential rain has soaked the district and resulted in swollen rivers, massive pools of water in rural areas and extreme surface flooding.

One of the worst affected areas was the stretch of State Highway 83 between Kurow and Pukeuri, where surface flooding continued to cause issues for motorists.

Senior Constable Peter Scott, of Kurow, said while the situation had improved since the weekend, there was still significant pooling and surface flooding on the highway.

"I think things have improved, but the rivers and creeks are still up. Everything's very saturated so any further rainfall will impact quickly on the state of the highways.

"At the moment it's OK, but everyone has just got to be cautious about coming around bends and finding half the road flooded over. It's when they're trying to avoid that patch of surface water they are coming off the road. Everyone's still got to be pretty cautious.''

He had attended several minor vehicle accidents as a result of the flooding, including one late last week when a vehicle with two occupants flipped and came to rest on its roof after trying to avoid flooding in Special School Rd at Otekaieke.

The most badly affected area was between Pukeuri junction and Georgetown, particularly at the intersection of the highway and Grants Rd.

There was "intermittent flooding'' in several areas elsewhere on the highway, Snr Const Scott said.

The Hakataramea, Kurow and Waitaki Rivers were all at high levels, as was Doctors Creek.

Snr Const Scott advised motorists to check road conditions before they travelled in the area.

The NZ Transport Agency had a caution in place on the highway between Kurow and Peebles and as of yesterday afternoon, 46 roads around the district were listed as either closed or under caution.

Meanwhile, the Waitaki District Council closed all of its sports fields.

Boil-water notices were in place for properties on the Windsor rural water scheme, as well as for the Waihemo water supply including the Dunback, Goodwood and Palmerston supply areas, and the whole Lower Waitaki rural water supply.