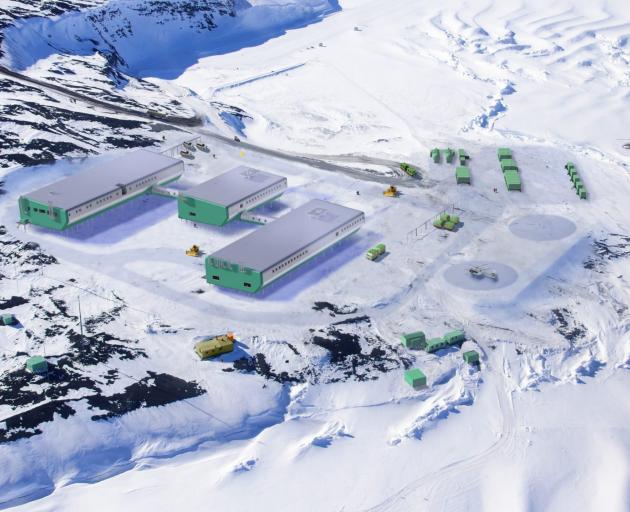 The Scott Base redevelopment, which will be built in Timaru, will replace the current 12 separate buildings with three large interconnected buildings. IMAGE: ANTARCTICA NEW ZEALAND
Timaru has the capacity and capability to complete the $344million Scott Base build ‘‘in spades’’.

That is according to Venture Timaru chief executive Nigel Davenport, who said the massive project would put Timaru on the map nationally and internationally.

It was announced late last week that PrimePort Timaru had been chosen as the main build site of the project, which involves fabricating buildings and a new wind farm to be shipped to the Antarctic.

Estimates predict the project will involve 170 jobs at the peak of construction and more than 700 jobs over six years.

The main contractor is Christchurch-based Leighs Construction, and chief executive Gary Walker said it would mean jobs for the region.

‘‘We’ll be recruiting in Timaru for this once-in-a-lifetime opportunity.

‘‘It’s not every day you get to build an Antarctic research station on your back doorstep.’’

Mr Davenport said that while there were clear economic opportunities for the trade sector, the benefits would extend further than that, into accommodation and hospitality, and would serve as a drawcard to bring visitors to the district, and also provide education opportunities.

The benefits would flow beyond the Timaru district, he said.

‘‘The district and wider South Canterbury — and even this part of the central South Island — it’s home to a full range of trades who have grown their capacity and capability over the years.’’

There were 2500 people employed in the construction sector in the Timaru district — making it the third-largest sector — nearly 200 building firms across Mid and South Canterbury, and of the 100 apprentices signed up as part of a $4million push this year, 90 were in construction.

The district also had good capacity for a range of accommodation options, from short-term single rooms to long-term family homes for rent.

‘‘In the wider district, there are 630-odd rooms, with capacity for 1800 people, plus 120 B&Bs, and we can work with two or three private property investors who have a range of properties available.’’

The project could lead to future opportunities for the district, Mr Davenport said.

‘‘A couple of the countries that have a presence on Antarctica and whose facilities are in need of upgrading, they might be looking at what we are doing here.’’

Timaru Mayor Nigel Bowen agreed it was an incredible opportunity for the district.

‘‘This is a massive vote of confidence in the Timaru district and our ability to play our part in delivering these large-scale projects.’’

The council will invest $1.5million to upgrade essential port infrastructure for the project.

‘‘This is a district with endless potential, and with this amazing project we get the opportunity to show the world just what Timaru can do.’’

Antarctica New Zealand chief executive Sarah Williamson said while the organisation would not divulge other ports which had competed for the project, it had been a close race.

‘‘The entire base is being built at the port and will then be shipped south to the Antarctic in eight modules on a massive ship.’’

Construction in New Zealand enabled a year-round build, and meant buildings could be tested and commissioned before they were shipped south.