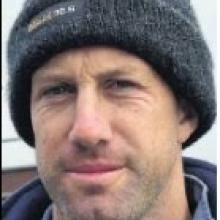 Rikki McCall
A victim of a suspected hit-and-run in the Catlins was a ‘‘top, top guy’’ who will be hugely missed, his father says.

Yesterday his father Robin McCall, of Clydevale, paid tribute to the ‘‘hard-working, genuine guy’’, who was a father to two young girls.

‘‘There he was just walking up the road home and someone’s come and knocked him down. It’s hard to understand.’’

Mr McCall said his son was a ‘‘great husband and father’’ who loved being involved in his community.

‘‘He loved his rugby. He was a great player. He played at lock from his John McGlashan days and represented Otago as a boy.

‘‘He was coaching the Owaka side last couple of years.’’

Rikki had also played bagpipes for the Balclutha Pipe Band.

Mr McCall said the family was ‘‘devastated’’ by the loss, and requested privacy during the coming days.

‘‘Everyone just wants time to come to terms with this.’’

Mr McCall said his son appeared to have died during a short walk from a neighbouring property to his home in Owaka Valley Rd.

‘‘He had about 100m to walk, no corners, and someone’s knocked him down in that time. We’ve just got to let the police do their investigation.’’

Police reports suggest he may have been duck shooting during the day preceding the incident.

It appeared he might have been hit by a vehicle, police said.

A funeral for Mr McCall will take place at the Owaka Community Centre at 1pm on Saturday.

His death notice invites people to ‘‘join us in Rikki’s casual manner, in your farming gear, gumboots and all’’.

The rugby match between Owaka and Herriot has been moved from Saturday to Friday at 7.30pm at Herriot so Owaka supporters can attend.