Effort to consult with community praised 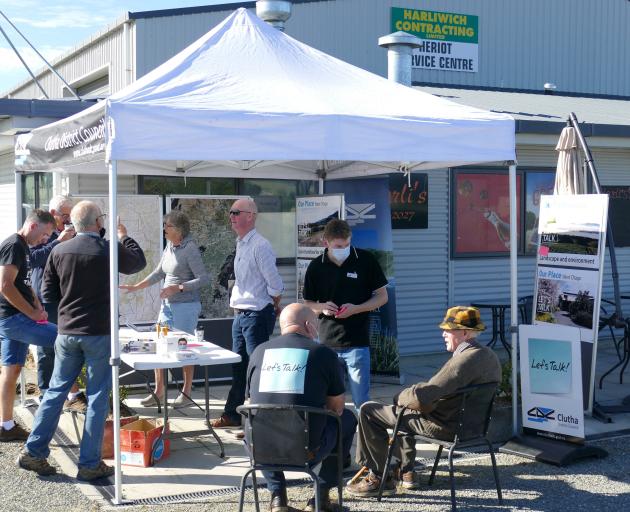 Clutha District Council staff and officials talk to members of the local community outside Harli’s Cafe in Heriot, as part of the Our Place West Otago community plan consultation, which began yesterday. PHOTO: RICHARD DAVISON
Housing and civic tidiness were among hot button topics during the opening session of community consultation in West Otago yesterday.

Eight residents came to talk to council staff and officials during the opening hour, which Clutha Mayor Bryan Cadogan described as "heartening".

Among key topics the council has identified for consideration is increasing housing, and a noteboard where participants could add their thoughts showed this loomed large in people’s minds.

Lifelong Heriot resident and retired spraying contractor Peter Haughey said he had come to share his views on roadside maintenance.

"I’m concerned with the vegetation on the verges, but it’s been interesting to see what else people are talking about.

"I pulled up and I was amazed how many people were here. Being able to talk face to face with councillors like this has to be a good thing."

Among those present was West Otago ward councillor John Herbert, who encouraged local people to step up and have their say during subsequent events.

"I don’t think any previous council has reached out so directly to the corners of the community like this, so it’s a fantastic opportunity."

"We’ve got the health centre, community centres and swimming pools already driven by local people, but let’s use this process to find the gaps and build on that ability to achieve great things."

Further outreach sessions take place today, at Illy’s Cafe, Tapanui, from 10am to noon; and at Heriot Hotel from 4pm to 6pm.